I look forward to meeting you, says villages’ new vicar 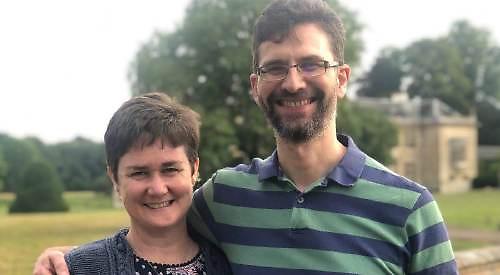 The Rev James Leach will take over as priest at St Mary’s, Whitchurch and St John’s, Whitchurch Hill, from Rev Claire Alcock, who stepped down last year to move to a parish in Reading.

Rev Leach, 53, is currently associate priest for a parish in Gerrards Cross and will move shortly with a view to starting work in the autumn.

His role is a “house of duty” or part-time post in which he will serve for three days a week while completing his professional doctorate with the University of Chester.

His thesis is on the ways in which Christians integrate their faith with their everyday lives and he hopes this will inform his teaching and ministry.

Rev Leach was born in Dorset and spent much of his childhood in Oxford, where he met his wife Debbie. They have been married for 28 years and have three children, who are now all teenagers or young adults. He studied classics at Balliol College, Oxford, then spent seven years working in an IT role for oil multinational Shell.

A lifelong Christian, he decided to change careers when he realised he enjoyed his volunteer role in Christian education more than his day job. He trained at Wycliffe Hall, Oxford, which he finished in 1999 before taking up a curacy near Solihull.

He remained there for seven years then moved to Buckinghamshire.

Rev Leach said he was drawn to Whitchurch’s riverside location and the opportunity to work in a close-knit parish where he could get to know everybody.

He was also impressed that the churches have a joint friends group, which formed in 2016 and recently raised more than £10,000 to fix the historic clock at St Mary’s.

He said: “I’ve worked at larger churches ever since I was ordained and the thought of really getting to know everybody and becoming part of that community was really appealing.

“I know Whitchurch is a lively community with a lot of activities and although this is my first time as ‘the’ vicar after working in associate roles, I’ll be part of a wider team ministry and will benefit from the support of some highly experienced colleagues.

“We haven’t been able to see as much of the village in advance as I’d have liked because of the lockdown, but we’re looking forward to moving and getting to know everybody.”