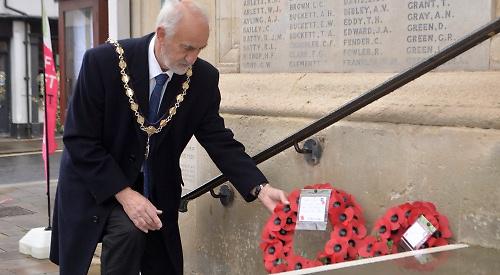 THE president of the Henley and Peppard branch of the Royal British Legion has received a special commendation for the charity’s centenary.

John Green, a former army officer, was nominated by Anne Evans, who chairs the branch.

She revealed the award during a service to mark the centenary at St Mary’s Church in Henley on Saturday.

Mr Green, 85, who lives in Maidensgrove, was chairman of the branch from 2012 to 2020 when Mrs Evans succeeded him.

He said he was honoured to receive the commendation in the form of a certificate and badge and that it felt very personal.

“I was quite surprised and it came completely out of the blue,” he said, “I can’t deny that I’m delighted and a little bit proud.

“It is a symbolic gesture which recognises the work that many people do for the Legion.

“It is also a reminder in the 100th year that the work we do for the Legion now is just as important as it was all those years ago.”

His father, Capt William Leslie Green, served in the First World War and was one of the early members of the local branch. He died when his son was only 16.

Mr Green added: “I like to think it is part of his legacy that I’m carrying on.”

He said one of the highlights of his time with the Legion was taking part in a pilgrimage to Ypres to commemorate the centenary of the end of the war in 2018 with his grandson Edward Bloomer.

Mrs Evans said: “His leadership, drive and passion were put to the test as over the years the branch worked towards increasing membership by word of mouth and personal contact from around 70 to 121 to date at a time when other branches were struggling.

“As a human being, John just seems to want to do good naturally. He reflects his passion for the Royal British Legion as he goes about his daily life.

“What he does for the members and community is not done out of duty alone; he does them because he passionately believes in the outcome of his service as a Legion member, as chairman of our branch and now as president and standard bearer.

“His friends and family are in no doubt where his priorities lie and they have learned that there is no point in encouraging him to take it easy as age creeps on.

“He is determined to carry on doing what he knows will help the most.”

The centenary awards recognise individuals that demonstrate the Legion’s core values and Mr Green was honoured for the passion he has shown to the organisation.

Earlier this month, he took part in a solo 100km walk to raise money for the Legion while wearing a replica First World War army uniform.

He walked 25km every day for four days in a row from his home to Checkendon and back and raised more than £2,500.

Mr Green was one of four standard bearers at Saturday’s service, which started at noon and lasted about an hour.

It was conducted by Fr Jeremy Tayler, rector of Henley with Remenham, and included hymns and Bible readings and a solo singer. The Henley branch standard was presented by Mr Green, the Peppard standard by Col Nicholas Launders, the Henley Army Cadets’ standard by CSgt Jamie Forehand and the Dunkirk Veterans’ standard by James Nelson.

The four standards were presented to Rev Tayler and placed into stands for the duration of the service.

Lt Col Peter Blaker, a former president of the Henley and Peppard branch, read the Exhortation and Col Launders gave a reading.

Mrs Evans read the Responsorial Psalm before Mr Green gave thanks to God for the continued success of the Legion.

The service followed a wreath laying ceremony on the steps of the town hall to mark the centenary.

The first wreath, which was made of plastic poppies, was laid by Mrs Evans who was followed by the Mayor.

Mr Green and Col Launders attended with their branch standards along with Lt Col Blaker, who lives in Rotherfield Greys.