Disney is giving this remake its Beast shot 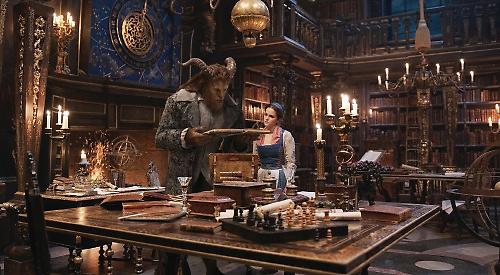 WHEN it was announced that Disney would be producing a live-action remake of its 1991 animation classic Beauty and the Beast, it was hard to believe a quarter of a century had gone by.

The original is still with us, after all. DVD and Blu-ray editions have sold in the millions and the film is now available to buy digitally — to say nothing of the various spin-off toys populating the shelves of the Disney Store.

Not that the story was original to the House of Mouse. A French fairytale — the best known version of which dates from the 1700s — was among the most popular Ladybird books of its day, with an enduring hold over the popular imagination.

Such is the nature of folk and fairy stories — they are told and retold, partly in order to reflect the times in which the telling takes place.

Rewind a year and Disney was gearing up to release a live-action version of The Jungle Book. The result was a smash hit on all fronts — and there’s no reason to think the tale of Belle and her furry friend will be any different.

As played by Emma Watson — no stranger to the fantasy genre — Belle is a courageous young woman who is taken prisoner by the mysterious Beast in his castle in exchange for the freedom of her father, Maurice.

Despite her fears, she befriends the castle’s enchanted staff — among them Cogsworth the clock, Lumière the candlestick, Plumette the feather duster, Mrs Potts the teapot, and her son Chip the teacup.

In time Belle learns to look beyond the Beast’s fearsome exterior to recognise the true heart and soul of the human prince within.

Meanwhile, a hunter named Gaston is on the loose, looking to hunt down the Beast at any cost and take Belle for himself.

Known for his work on The Twilight Saga, Dreamgirls and Mr Holmes, veteran director Bill Condon has refashioned the characters for a contemporary audience but stayed true to the animation’s music, with several new songs and an amended score by the 1991 film’s composer, Alan Menken.

It’s worth reflecting that that film was released just a few months after Terminator 2: Judgment Day had stunned film fans worldwide with its ground-breaking computer-generated special effects.

A quarter of a century on, some of the same technology is now being used to bring to life characters that were previously only thinkable using cartoon animation. Disney is justly famous for its Magic Kingdom. On reflection, though, better make that the “industrial light and magic kingdom”.

Beauty and the Beast is now showing at Henley’s Regal Picturehouse cinema.

Entertainment , cinema , Beauty and the Beast