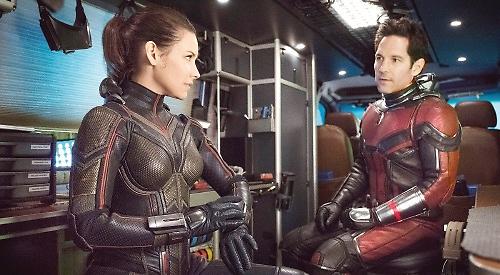 But when it comes to
Ant-Man and the Wasp, the sequel to 2015’s Ant-Man, there are some intriguingly New Scientist-y concepts floating about in the mix of science-fiction and fact.

Last time around, the Wasp, aka Hope van Dyne (Evangeline Lilly), learned that her mother Janet — the first Wasp — had disappeared into a subatomic quantum realm while disabling a Soviet nuclear missile in 1987.

Her mission succeeded but she was presumed dead.

But when former criminal Scott Lang (Paul Rudd) takes up the mantle of
Ant-Man, he discovers a way to both enter and return from the quantum realm — holding out the possibility that Janet might still be alive.

Flash forward to the current film and Janet and her father Hank Pym (Michael Douglas), the first Ant-Man, have started to work on ways of reaching into the quantum realm.

They briefly manage to open a tunnel into it, causing Lang to receive an apparent message from Janet (Michelle Pfeiffer), with whom it turns out he is quantumly entangled.

Ant-Man and the Wasp now have their mission — but they have reckoned without the quantumly unstable Ghost (Hannah John Kamen), who has her own reasons for trying to get to Janet first.

Believe it or not, this is already the 20th film in the Marvel Cinematic Universe.

Due to the crossover nature of the enterprise, the events in this film take place not long after those in Captain America: Civil War, and we join Lang as he is grappling with the consequences of his choices as a superhero and a father.

There’s also the question of how the events in this film tie in with the cosmic battle faced by the MCU’s other heroes in the recent Avengers: Infinity War. As such, we see Lang struggling to balance his home life with his new responsibilities as Ant-Man.

None of which is any sweat for the ever-likeable Rudd, who invariably makes comedy-drama look easy.

A comedian in his own right, Rudd received a star on the Hollywood Walk of Fame on July 1, 2015 — just days after the release of Ant-Man.

As he unveiled the 2,554th star on the mile-long strip of plaques on Hollywood Boulevard, Rudd said: “I remember being a kid and walking this boulevard and reading the names and thinking about what so many other millions of people thought about, which is, you know, ‘Who’s that?’”

Ant-Man and the Wasp is now showing at Henley’s Regal Picturehouse cinema.