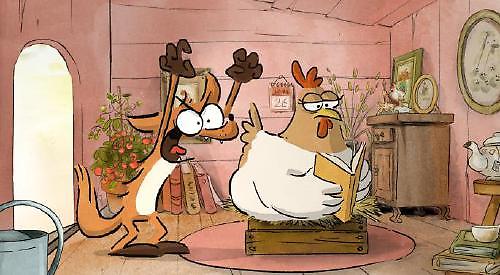 A MEDDLESOME duck, a bossy pig and a dozy rabbit face a series of misadventures in this family-friendly animation.

The Big Bad Fox and Other Tales comprises three humorous stories following these creatures and others.

Each of the characters first appeared in children’s picture books by Benjamin Renner, who directed the film with Patrick Imbert.

In the first part, A Baby to Deliver, a stork who claims to have broken its wing entrusts Duck (Bill Bailey), Pig (Justin Edwards) and Rabbit (Adrian Edmondson) to deliver baby Pauline to her expecting parents. But, as the hapless trio try to find their way to Pauline/s home, they are faced with all sorts of danger.

The central tale, The Big Bad Fox, sees the cowardly fox (Giles New), try and live up to his name by stealing three eggs from under their unsuspecting mother (Celia Imrie) in the hope of making friends with Mr Wolf (Matthew Goode).

But things don’t go to plan when the eggs hatch and the chicks instantly believe Fox is their mother.

This then leaves Fox in a quandary — does he play along and bring up the chicks as his own, or does he share his spoils with Mr Wolf?

Then, rather strangely for a summertime release, the finale sees Pig, Duck and Rabbit reunite as they embark on a scheme to replace Father Christmas after they wrongly believe him to be dead.

Unsurprisingly, they find themselves come unstuck again when they are imprisoned with some fearsome street dogs when they are accidentally picked up and locked in a dog pound.

This last sequence also features a part for a lazy farmyard hound (Phill Jupitus) who delivers some killer lines.

Almost all the animals in this hand-drawn animation have big buggy eyes and rounded bodies as the style dictates.

And, like the film Ernest and Celestine (2012), on which the directors worked previously, winning an Academy Award nomination for best animated feature, the graphics are deceptively simple.

There are no neatly drawn lines here but the 2D minimalism has been executed to great effect, although it probably would be better suited to the home television rather than the big screen.

But there are lots of heart-warming and laugh-out-loud situations and slapstick jokes for people of all ages to enjoy and a British cast has done a great job of re-dubbing of what was originally a French film, although one or two of the gags are sadly lost in translation.

• The Big Bad Fox and Other Tales is now showing at Henley’s Regal Picturehouse cinema.