Close encounters of the herd kind 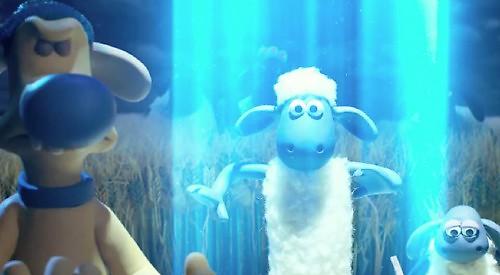 BACK in the late Sixties, Star Trek challenged us to “seek out new life and new civilisations — to boldly go where no man has gone before.”

Ten years later, a young filmmaker by the name of Steven Spielberg picked up the gauntlet and made Close Encounters of the Third Kind about a man whose life takes on a whole new dimension following an experience with an unidentified flying object.

At some point, Spielberg must have asked himself what would have happened if it was a child rather than an adult that had the encounter in question.

The result, in 1982, was E.T. the Extra-Terrestrial, which overtook Star Wars to become the then highest grossing film of all time.

But what if the person having the close encounter with an alien lifeform wasn’t in fact a human at all?

It is a question that Aardman Animations have set out to answer with their sequel to 2015’s blockbuster Shaun the Sheep Movie.

Where that film saw Shaun and his flock-mates venture into the big city to find their lost farmer, here the tables have turned and a new lost hero crash-lands at Mossy Bottom Farm who turns out to need Shaun’s assistance.

This new friend is Lu-La, a mischievous tutti-frutti-coloured alien who lands on Earth while searching for her way back to a foreign planet.

She looks a little different and lives a curious life in our world, with frequently hilarious results.

Her homecoming mission intersects with the scheming plans of a covert government UFO organisation led by the poker-faced Agent Red.

They are determined to sabotage the unlikely but still peaceful co-existence between sheep, dogs — and now aliens.

Their shared affinity is one of utterly foreign but somehow totally comprehensible baas and bleats, calling to mind the perfect opposites of Wall-E and Eve, Marlin and Dory, Lady and the Tramp.

The filmmakers clearly have a love for sci-fi as the film is chock-full of references to such classics of the genre as 2001: A Space Odyssey, Alien and, yes, Close Encounters of the Third Kind and E.T. — which eagle-eyed parents will no doubt enjoy spotting.

Farmageddon boasts the outstanding claymation detail that Aardman fans have come to expect and promises a feelgood treat for all the family.