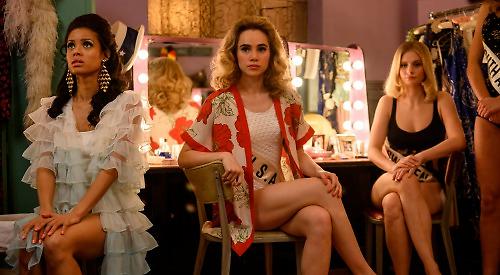 WITH the #MeToo movement having been spectacularly vindicated by the jailing of Hollywood predator Harvey Weinstein, Philippa Lowthorpe’s latest film could hardly have been better timed.

A rousing cheer for sisterhood and a nostalgic trip back to the Seventies, Misbehaviour is inspiring, entertaining and somehow distinctively British.

Based on the early days of the women’s liberation movement, the film is set in London in 1970, when the glitzy Miss World contest was famously invaded by feminist protesters.

Keira Knightley stars as Sally Alexander, a spirited mature student who’s increasingly frustrated by the sexism she encounters in academia.

She goes to the very first meeting of what was to become the women’s liberation movement and meets loud, proud Jo Robinson (Wild Rose’s Jessie Buckley), a rebellious activitist who’s living in a liberal commune in north London.

The women are appalled by the publicity around the Miss World contest — in which women parade around in swimwear for male approval — and they plot to infiltrate the event and make a stand.

Fired with feminist fury, they vow to send a strong message to the world with a mixture of water pistols, spray paint and bravado.

At the same time, we find ourselves backstage with Miss Grenada (Gugu Mbatha-Raw), who was to become the first woman of colour to win Miss World.

The clever layering of the story in this way makes Misbehaviour a fascinating and funny glimpse behind the scenes, as it details the preparations of Miss World showrunners Julia and Eric Morley, played by Keeley Hawes and Rhys Ifans.

With the BBC preparing to broadcast the event live, the couple have managed to persuade the legendary American comic Bob Hope to host. Greg Kinnear is on hilarious form as the clumsily flirtatious Hope, whose cheesy chat-up routines are barely tolerated by his long-suffering wife Dolores (Lesley Manville).

Not only do these perfectly cast actors amuse, they also sport a fabulous array of Seventies outfits that colour their characters.

It’s all glitz and bright polyester one side of the stage and Afghan coats and flares on the other.

In introducing us to the contestants themselves, the film offers an important insight into the political climate of the era.

It is also a timely tribute to the impact that those pioneering women’s lib campaigners had on our world today.

• Misbehaviour is showing at the Regal Picturehouse cinema from today (Friday).