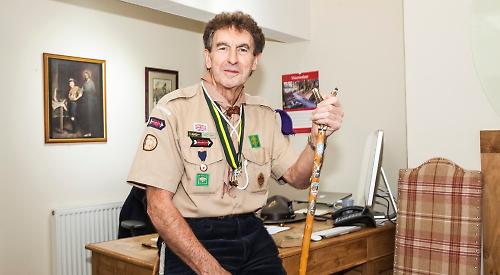 THE leader of Goring’s British Boy and Girl Scouts has been made leader of the movement worldwide.

David Cooksley, who joined the organisation as a boy, has been appointed grand scoutmaster for Britain and grand scout of the Order of the World Scouts.

The organisation, which was founded in 1909 by Sir Francis Vane, is much smaller than the better-known Scout Association but has been gradually expanding since Mr Cooksley became chief commissioner in 2000. It now has chapters in five UK counties, all of which have tripled in size since they were launched, and as far as Nepal, Mexico, Jamaica, Poland, Ukraine and South America.

Mr Cooksley, 74, hopes it will continue to grow under his leadership.

He still plays an active role with the Goring group, which has 65 members and is about to launch a “Rover crew” for 18- to 24-year-olds. Earlier this year he led a cycling expedition to Poole, a round trip of about 180 miles.

Mr Cooksley, who has lived in Goring all his life and now has seven grandchildren, said: “We lost thousands of leaders during the Second World War and when I became chief commissioner we were very much diminished. We’re still quite small but I’m trying to bring about a revival.

“I enjoy my job as it keeps me in good shape. I have to remain fit to keep up with the young ones! It’s made a huge difference to my life and I’m still determined to give back to the community after all the wonderful support I received as a child.

“I’m a great believer in scouting as it does wonderful things for young people. So many children have passed through the Goring group and they have lots of fond memories.