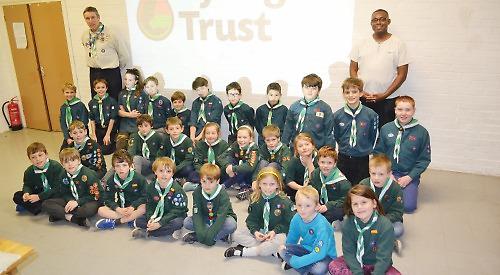 SCOUTS in Henley are hoping to help set up a twin group in Kenya.

Leaders of the 1st Henley Scouts are working with the Kyangala Trust, which helps the people of the rural village community that depends entirely on subsistence farming as a source of income.

Benedict Mwendwa, who helped found the trust, spoke at a meeting of more than 20 scouts and cubs at the scout hut in Greys Road.

He told the children about the work of the trust and how he hoped to set up a scout group in Kyangala.

Mr Mwenda was invited to speak by scout leader Martin Dawes, who discovered the trust while researching an old scout group in Kenya which was “adopted” by the Henley troop in 1983.

Then scout leader Tony Taylor made contact with the Kyangala Scout Group, near Machakos, which had more than 100 scouts and guides.

The Henley troop helped design a badge and raised more than £1,000 for tools, seeds and building materials before the two groups lost touch in 1989. Mr Dawes said it was a “bizarre coincidence” that the trust was based not far away in High Wycombe.

He added: “After meeting Benedict and the trust and learning of their work, I suggested starting a scout group and offered to help set it up.”

Mr Mwendwa said: “We are supporting the community around education, water and health. There is a scarcity of those resources and we are trying to alleviate the challenges.

“Martin said there were historical links with Henley so he contacted me to ask if I would like to come and talk about the trust, the village and the work we are doing. One of the projects we would like to set up is a scout group because there is a shortage of positive influences.”

Mr Mwendwa’s grandparents lived in Kyangala and he can remember walking miles to collect water from a dirty well. He moved to Britain 18 years ago.

After the talk, he took questions from the scouts and handed out wristbands. For more information about the trust, visit www.kyangala-trust.org.uk