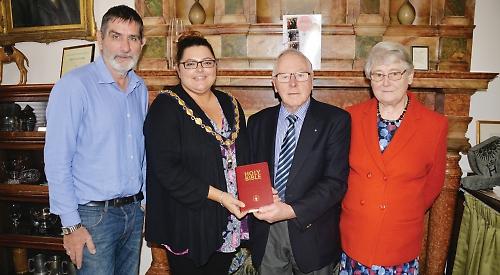 The Mayor of Henley has been presented with a copy of the Holy Bible.

Kellie Hinton received the book during a brief ceremony at the town hall.

The donation is made every year by the Gideons.

Councillor Hinton said: “This is an important tradition as we are a traditionally Christian country. I was baptised at St Mary’s Church, as was my daughter.

“I don’t practise strictly but I certainly appreciate the strength of people’s faith and the way in which it sets them on a path for life.

“We are now a multi-faith society but celebrating one religion doesn’t necessarily exclude others and we should allow people to read and spread the word of whichever faith they believe.”

Chris Pritchett, of Reading Gideons, who made the presentation with his wife June, said: “It matters because it’s God’s word — it’s as simple as that. It’s the best book you could ever read.”

Pictured, left to right, the Mayor’s consort David Eggleton, the Mayor and Mr and Mrs Pritchett