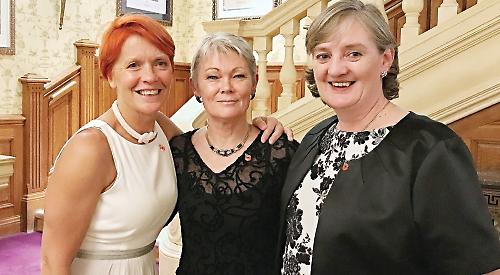 She won international fame in 1989 as the skipper of the first all-female crew to sail around the world in the Whitbread Round the World Yacht Race.

Maiden crossed the start line on September 2 and went on to win two of the legs and came second in her class overall. This was the best result by a British boat since 1977 and the best ever result for an all-female crew.

Tracy was made an MBE and became the first woman to be awarded the Yachtsman of the Year Trophy in its 34-year history.

She spoke about how she became involved in sailing and about Maiden and its restoration and global campaign, Maiden Education. This charity will receive proceeds for fund-raising activities with the yacht.

Maiden Education is also working with a number of charities which either empower, teach or mentor girls or promote, facilitate, lobby for or provide solutions which enable the education of girls not currently afforded that basic human right.

Maiden Education will be well placed to work with smaller, solution-based charities and not-for-profit organisations around the world.

These have been chosen for their proven ability to understand and solve the very real issues which prevent girls attending school.

Their successes are tangible and measurable and focus on areas often overlooked by larger organisations and global charities.

For more information or to make a donation, visit www.themaidenfactor.org