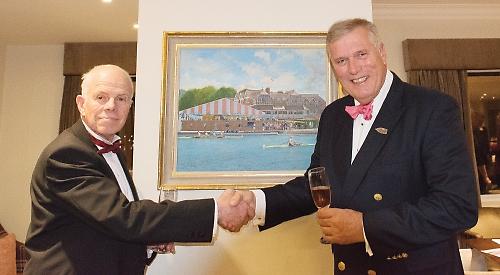 A COMMEMORATIVE portrait of Henley’s Leander Club on finals day at last year’s royal regatta has been commissioned to mark the club’s 200th anniversary this year.

The artwork, painted in oil on canvas by Timothy Easton, shows Leander’s quadruple sculls A crew returning to the pontoon after beating the club’s B crew in the Prince of Wales Challenge Cup.

Club president Jeremy Randall is depicted waiting to greet them with a bottle of champagne and European champion and Olympic silver medallist Vicky Thornley is shown departing for her race in the Princess Royal Challenge Cup for women’s single sculls.

Mr Easton, who lives in Suffolk, set up his easel on the riverbank in Thames Side opposite the club and a short distance downstream from Red Lion Lawn.

He made a series of pencil sketches as the scene unfolded across the water.

He also painted several studies of the surrounding landscape in the days after the regatta before creating the final painting at home.

Mr Easton said: “We were lucky not to have rotten weather on finals day because everything on the water looks so much better on those marvellous, bright summer’s days. It was quite an unusual scene because you had two Leander crews racing against each other so you can see both of them.

“Vicky Thornley is there as well so women are represented.

“It was great fun to do. I enjoyed it very much.”

The picture was formally unveiled at the club’s annual dinner in November and now hangs in the bar area. A limited run of 200 prints, each signed by the artist, has been produced for sale at £55 apiece.

Mr Easton has been exhibiting in the regatta’s stewards’ enclosure since the late Eighties and previously painted the GB coxless four that won gold at the Sydney Olympics in 2000, which included Leander’s James Cracknell, Matthew Pinsent and Steve Redgrave.

Leander president Jeremy Randall said: “We’re all very pleased with it as Timothy has perfectly captured the excitement of Leander Club on finals day.

“By focusing on the racing rather than just the spectators drinking champagne, he has created a very poignant image for those of us who are interested in the sporting side of things.”

Leander Club was founded in 1818 and moved from the Tideway in London to Henley in 1897.

It opened its doors to women in 1998 and elected Debbie Flood as its first female captain in 2013.

It is the most successful rowing club in the world, with 127 Olympic and Paralympic medals to its name.