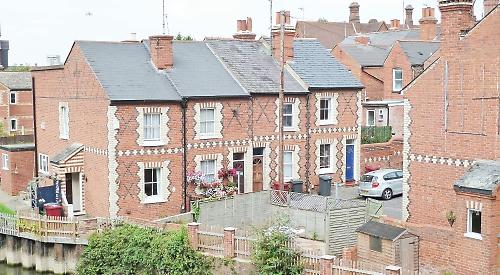 THE subject of the January talk was “The history of Katesgrove”.

The speaker was Evelyn Williams who has lived in the area for almost 20 years.

Evelyn has done much research into the area’s history, particularly its industry. He was a founder member of and is a regular contributor to the Whitley Pump, the local news website for Katesgrove.

The area developed around the old Reading to Winchester Road (modern Southampton Street) and is today a rich urban pudding of narrow streets lined mostly with Victorian terrace houses, many with ornate polychrome brickwork.

The skyline is still dominated by the spire of St Giles’s Church.

Evelyn showed slides of some of the earliest maps of the area.

On the John Speed map of 1611 the most prominent landmark was Katesgrove House.

One of its residents, French exile Count Charles Jean d’Hector, participated in the unsuccessful military campaign to restore the monarchy in France after the Revolution.

The house was sold for £1,000 in 1873 then demolished to make way for Katesgrove School.

We were shown an early view of the area the panorama sketched by Samuel Buck in 1734.

Looking north from Bob’s Mount, it depicts men digging the clay used in brick making. The river Kennet is clearly visible, winding its way through the landscape.

The area attracted a diverse range of industries.

In the 1830s the Philbrick family established a tannery in Katesgrove Lane. This processed animal skins for the leather trade and an unpleasant concomitant was the foul smell it produced.

Nearby was the Reading Iron Works, which were active from 1818. Today some of the cast-iron lamp standards it made survive around Reading.

Many brickworks were established in the area and Rose Kiln Lane is a reminder of the trade.

Katesgrove’s last brickworks, at Elgar Road, closed in the Fifties.

Until quite recently, Katesgrove abounded with public houses: the Tanners’ Arms in Orchard Street; the Red Cow in Crown Street; the Kennet Arms in Pell Street; and the Greyhound in Silver Street to name but a few.

During 1877, in opposition to the proliferation of ale houses in the area, St Giles’s Parish Church opened the Rising Sun Temperance House at Silver Street.

For an annual fee, members had the use of a library and reading room, could play billiards and, most importantly, could partake of non-intoxicating refreshments.

Recently, after a long period of neglect, a group of volunteers rescued the building from the blight of vandalism and today it is a thriving arts centre.

The subject of the next talk will be the “History of Abbey Baptist Church, Reading”.

This will take place at Abbey Baptist Church in, Abbey Square on Wednesday, February 21 at 7.30pm. All are welcome; entry is £2 to non-members.