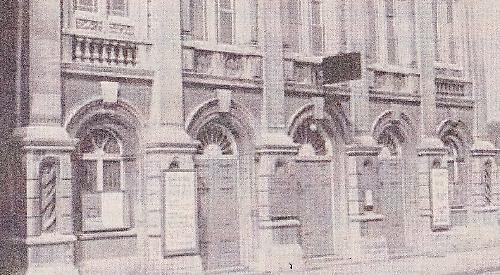 THE subject of the February talk was the “History of the Abbey Baptist Church, Reading” and the speakers were members of the congregation.

The talk began with a brief history of the Baptists in England.

The Baptist Church emerged in the religious reforms which swept through Europe in the 16th century in the wake of the proclamations of the German monk Martin Luther.

Luther and his followers believed that the Roman Catholic Church had become corrupt and its theology debased through the worship of saints and other religious images and which they considered to be forbidden in the Ten Commandments.

Instead, they wanted a form of worship that would focus on the scriptures contained in the Bible.

In about 1640 it is thought that a small group of Baptists, or Anabaptists as they were then known, established their first place of worship in Reading at a rented house in Pigney Lane, near Castle Street.

They had no minister to lead them and little money to support themselves.

Baptists at this time were still persecuted by the established church and were known in derision as dissenters.

The Reading-born Archbishop of Canterbury William Laud would dispatch his spies to raid places where dissenters were thought to worship.

Behind the house in Pigney Lane a wooden bridge was thrown across the Holy Brook to enable a swift escape during a raid.

In 1678 John Rance was elected their first minister and in 1686 they acquired the freehold of a building in Church Street, off London Street. It comprised a meeting house, accommodation for the minister and a burial ground.

A notable event in its history occurred in 1688 when, shortly before his death, the writer and puritan preacher John Bunyan read his penultimate sermon there.

At the start of the 18th century the congregation had swelled to 38 gentlemen and 66 ladies, so a new meeting house was opened at Hosier’s Lane (today’s Hosier Street) on Easter Day 1752. Thomas Whitewood was its first minister.

The lease on this building was due to expire in 1834 so a site for a new church was purchased at King’s Road in 1832 for £310 and John James Cooper, a local architect, designed the building.

The new church could accommodate more than 900 worshippers and benefited from gas lighting. Later, a Sunday school was added.

At King’s Road the Baptist ministry in Reading would reach its zenith and daughter-churches were established elsewhere in the town, Wycliffe Church at Cemetery Junction, at Carey Street and the Anderson Memorial at Amhurst Road to name but a few.

At Wokingham the Baptist burial ground was established where people could be buried side by side regardless of gender or social status.

Among the King’s Road congregation of note were Edward Phillip Collier, the brick manufacturer, and Edward Jackson, founder of the Jackson’s department store. Jackson would become the first Baptist mayor of Reading.

In 1980 the congregation moved to a new building across the Holy Brook and the old church was demolished in 1983.

Today the church is shared with Baptists from Ghana, Portugal and Sri Lanka.

The subject of the next talk, which will be preceded by the annual meeting, will be Coley and Coley Park with speakers Mike Cooper and Katie Amos.

It will take place at Abbey Baptist Church, Abbey Square, Reading, on Wednesday, March 21 at 7.30pm. All are welcome (£2 to non-members).