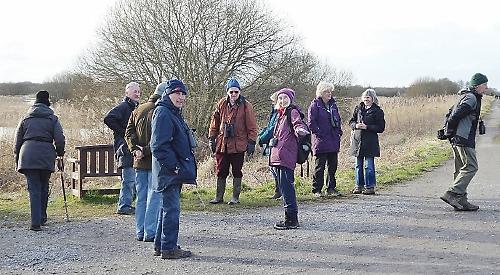 He has travelled to the area many times and presented stunning photos of colourful bee-eaters and mighty griffon vultures, among other species, as well the variable scenery of the area.

Particularly memorable were the slides of the spectacular Ronda gorge with its residing choughs, crag martins and alpine swifts. Even the bullring — the oldest in Spain — was not forgotten.

Members recently returned from a long weekend birdwatching on the Somerset levels.

Based in a hotel near Glastonbury, they were within easy reach of several RSPB, Somerset Wildlife Trust and national nature reserves.

The low-lying area is favoured by water birds and indeed is the site of the crane re-introduction project.

Many types of heron breed in the area and some 15 years ago little egret started to breed alongside our native grey heron and the rare and secretive bittern.

Members were surprised to find the latter at every location they visited.

Many of the 18-strong party were sitting in the impressive Avalon hide at RSPB Ham Wall when one eagle-eyed member spotted a bittern drop into the reed beds.

Everyone watched the space and after a few minutes it strode across an area of open water, allowing group leader Peter Spillett to take an excellent photo.

A fitting climax to a memorable weekend.

The next meeting of the group will take place at Pangbourne village hall on Tuesday, March 13 at 8pm, when Katrina Van Grouw will present an illustrated talk entitled “A very fine swan indeed: art, science, and the unfeathered bird” - a tale of a 25-year labour of love to write and illustrate a best-selling natural history book.