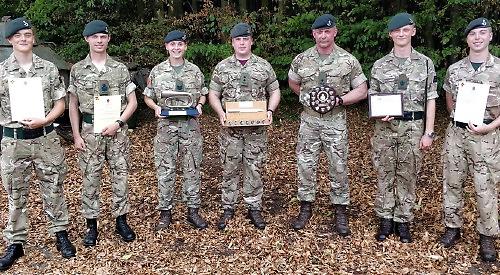 HENLEY Army Cadet Force has returned from its annual camp, which was held at the Swynnerton Training Camp in Staffordshire.

The 13-day camp consisted of the cadets’ military training including shooting, fieldcraft and first aid, among many other activities.

The Henley detachment also has a good reason to celebrate, with the three senior cadets returning from the National Cadet Training Centre having successfully completed the Master Cadet course — the only cadets in Oxfordshire to have done so this summer.

But there were yet more reasons to celebrate for the detachment as it picked up all three awards: Best Detachment, Best Recruitment and Participation as well as lieutenant Thomas Fearn being awarded the Best Detachment Commander in Oxfordshire.

Lt Fearn said: “The year 2017 to 2018 has been a great year for the detachment. I’m incredibly proud of all of the cadets in Henley, without them there would be no detachment and we wouldn’t have achieved everything we have done this year.

“The start of our new year means that anyone moving into Year 8 at school can now join our detachment and they’ll be joining the best detachment in Oxfordshire, as proven by our awards.”

The Army Cadet Force is a national youth organisation sponsored and supported by the Ministry of Defence for 12- to 18-year-olds. Army Cadets provides a challenging and varied syllabus based on military themes.

The Henley Army Cadet Force parades every Wednesday from 7pm to 9.30pm at the Old TA Centre in Friday Street and it is currently looking for new cadets and adult volunteers to join them. Feel free to come along and experience something new.