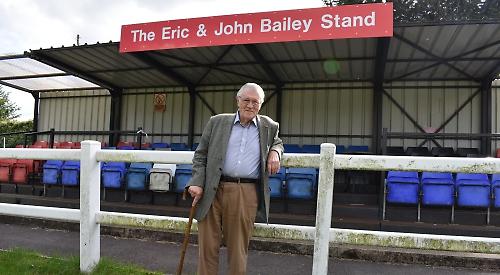 A STAND at Henley Town Football Club’s Triangle Ground has been named after the club’s life president John Bailey and his late father, Eric Bailey, who was a former chairman of the club.

The sign on the seated stand at the ground in Mill Lane was installed last week. It had been agreed at the club’s annual general meeting in June.

The stand will be known as the Eric and John Bailey Stand in recognition of the dedication and support over many years the pair have given to the club.

“When he was demobbed in 1946 he brought me down to see Henley. At that time I’d never seen a football match so I started watching football with Henley.”

Mr Bailey, who previously wrote match reports for the Henley Standard, says his father gave him a bag of sweets for his first match to stop him “being a nuisance”.

He said: “Sweets were very much on the ration then. I was allowed one before the match, one at half-time and one whenever Henley scored. They ended up winning 6-1!”