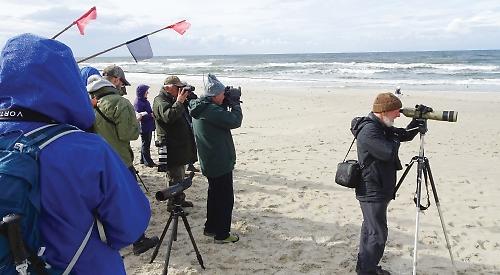 The group enjoyed a whistlestop tour from the sea eagles on the Isle of Skye, via the birds of the machair on the Uists and arctic skua on Lewis to encounters with otters on the Shetlands.

Nick had been booked as a late replacement for another speaker but, boy, did he deliver and he will be invited back.

It was only a couple of days later that the group undertook their first overseas venture — a trip to north-east Poland.

The nine-day extravaganza began in the Bialowski Forest where excellent views of no less than eight species of woodpecker were a colourful highlight.

It took much searching to find the elusive wisent, the European bison which can only be found in eastern Poland and Belarus, but eventually a solitary male was found at the edge of a wood.

Poland’s other large mammal is the elk and the group found four of these impressive animals at the Biebrza Marshes, although the views were somewhat distant.

It was in this area that many large flocks of cranes were encountered — one more than 300-strong. The last few days of the holiday were spent at Krynica Morska on the Vistula Spit, a migration hot spot in autumn.

A tower in the woodland was an ideal viewing position to see thousands of chaffinches and various species of tits streaming southwards to avoid the harsh northern winters.

Birds of prey also passed by regularly on their southern journey and these were so close binoculars were hardly necessary to identify thr sea eagle, honey buzzard, sparrowhawk, hobby, kestrel and merlin.

There were also mammals in the village. The group encountered a large party of wild boar one evening while one lucky individual chanced on a beaver in a lagoon close to the hotel. The group’s next meeting will take place at Pangbourne village hall on Tuesday, October 9 at 8pm when David Boag will present “The puffin”, an illustrated talk featuring photographs both inside the bird’s underground nest and underwater chasing fish.