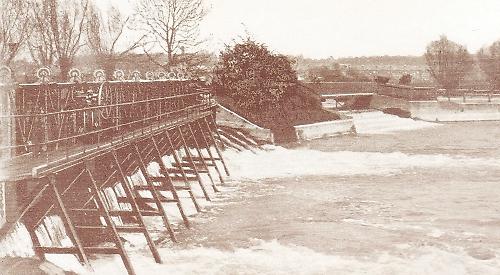 THE subject of the September talk was Amelia Dyer and “The Baby Farm Murders”.

The speaker was Angela Buckley who, after a career in teaching modern languages, is now a writer on the subject of crime history. A keen family historian, she also chairs the Society of Genealogists.

A gruesome discovery was made in the River Thames at Reading on March 30, 1896 when bargeman Charles Humphreys and a colleague noticed a suspicious object floating in the water near the Clappers Weir footbridge at Caversham Lock.

Humphreys managed to fish the object out of the river and on closer inspection it was revealed to be a brown paper parcel tied with string. It contained a brick and the body of a baby which was wrapped in newspapers and had a cord tied tightly around the neck.

Humphreys left his mate at the lock with the parcel and ran to the police station at the foot of London Street to report his discovery.

Later, he returned to the lock with a police constable to collect the package and deliver it to the town mortuary.

Dr William Maurice, the mortuary surgeon, examined the infant, a girl aged between six months and one year, and concluded she had died of strangulation.

A murder investigation was launched by the police led by Supt George Tewsley, assisted by Dc James Anderson and Sgt Harry James. More bodies of babies were found during a search of the river at Caversham.

An important clue was discovered on the parcel paper: it bore the faded stamp of the Midland Railway Company with the date of October 24, 1895 and Bristol Temple Meads and was addressed to a Mrs Thomas at Piggott’s Road, Caversham.

Dc Anderson took the parcel to Reading station where a clerk remembered it and knew the recipient’s real name to be
Mrs Dyer, who had moved to Kensington Road, Reading.

Dyer’s home was put under observation and enquiries with the neighbours revealed that one had given some string to Dyer on the same day that the child’s body was found.

On April 3 police arrived at the small terrace house in Kensington Road to arrest Amelia Dyer.

A search was made by officers and they found string that was identical to that used to tie the package, the same cord that was used to strangle the child, a box that bore traces of having contained a corpse and letters from parents who had put up their children for adoption by Dyer, whose principal source of income was to care for the children of parents forced to give them up for adoption, usually those born out of wedlock. She received a fee of £10.

Many of the children in her care were allowed to die of malnutrition but later she turned to murder as a means of disposing of them.

Dyer was sent for trial at the Old Bailey in London where she was charged with the murders of Helena Fry, Doris Marmon and Harry Simmons.

The investigating detectives, after reading the letters found at her home in Kensington Road, concluded that the first body found at Caversham Lock was probably Fry’s. She had been the illegitimate daughter of a domestic servant.

After the judge’s summing up, the jury took just five minutes to reach a verdict of guilty and Dyer was sentenced to death.

The next talk will be the “History of the Forbury” by Joy Pibworth and will take place at the Abbey Baptist Church, Abbey Square, Reading, on Wednesday, October 17 at 7.30pm. All are welcome, £2 for non-members.