Club raises £33,000 for three charities in just a year 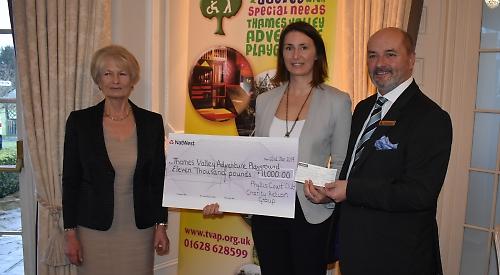 The club’s Charity Action Group presented £11,000 each to three charities at its annual meeting.

They were Riverside Counselling Service in Northfield End, Henley, Young Adult Carers Bucks, which works at The Henley College, and Thames Valley Adventure Playground, which is based in Maidenhead.

The money was raised by events at the private members’ club during the year, including a cabaret night, clothes sales and music recitals. Action group chairwoman Diana Pearman presented the cheques to representatives of the charities along with club chairman Barry Jackson.

She said: “2018 saw a mixture of events, some of which are tried and tested and other more adventurous ones. Requests come all the time from charities and there are difficult decisions to make. There are so many good charities.”

Hilary Arthur, of Riverside Counselling, said: “We are enormously grateful. In uncertain times, people feel more vulnerable and isolated so it’s absolutely amazing to have this money to support those people who we help.”

Sandy Briscoe, of Youth Adult Carers Bucks, said: “We are absolutely delighted to receive such a large sum of money to help all our young carers at The Henley College. It will give them the same chances as everyone else.”

Reama Shearman, of the Thames Valley Adventure Playground, said: “The charity plugs a gap for hundreds of local families and has more than 15,000 visits per year. This money will provide 183 respite days, so it’s very important.” Mrs Pearman also presented a gift voucher to the action group’s outgoing secretary Ruth Dean.

This year the group is raising money for the Thames Hospice in Windsor, Wyfold Riding for the Disabled and Camp Mohawk in Wargrave.

Mr Jackson said: “Diana and her group of volunteers never forget that there are people who need more support in their lives and strive to give them that support in any way they can.

“Their tireless work and support has achieved results and I can only thank them for their time and commitment.”