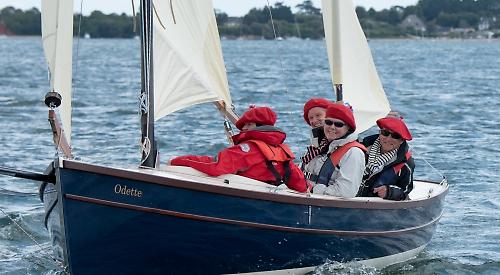 THE Whalers have just returned from another successful visit to the famous Semaine du Golfe festival in the Gulf of Morbihan, a natural harbour in southern Brittany.

The festival is held every two years and this was the Whalers’ seventh visit.

The organisers describe it as: “An international maritime event, a cultural event, a big popular festival in the splendid natural scenery of ‘Petite Mer’ (Morbihan in Breton).”

The gulf has a number of islands and islets within it and is protected from the Atlantic by a narrow entrance.

However, it is this narrow entrance and the islands that give it its unique tides, currents, counter-currents and sometimes very choppy waters. At its peak, the tidal races can be as strong as nine knots.

A favourite pastime of the crowds at certain times is watching boats trying to make headway either under sail or engine against these extremely strong currents.

The registered boats (more than 1,400 this year) are divided into 11 homogeneous and identifiable fleets — yoles and sail-rowing boats, classic yachts, old fishing and working boats, “Pink Lady” dragon boats and sea kayaks and about 30 spectacular sailing boats of 20m to 40m from the European maritime heritage (three-masters, brigs, schooners, etc.).

Each day, each flotilla follows its own sailing programme, stopping for lunch and anchoring each evening in a different port to create an “exploded” maritime festival animating the whole gulf.

A major industry in the area is oyster production and these were made plentifully available at all stops thanks to the generosity of each local town and village sailing organisation. The opening parade on the Monday and the final parade on the Saturday bring together all the boats, all fleets combined, for a breathtaking nautical show.

Many local boaters come to see it live on the water and large numbers of the public flock from the surrounding areas to view it from the shore.

The Whalers took not only Molly, their replica New Bedford whaleboat, which is a familiar sight on the Henley Reach, but also two Bay Raiders made by Swallow Yachts, making theirs the largest entry in their fleet.

On two different mornings the fleet that they were in, numbering some 140, had a deadline to make a certain point otherwise the tide would have turned unfavourably.

Needless to say, this also coincided with no wind. Molly’s crew, being the only ones in the fleet that did not possess an engine, had to row the eight to nine miles each time.

However, thanks to their regular Wednesday night outings on the Thames, they were able to accomplish this task. This caused much bemusement to all the other boats, many of whom the Whalers overtook despite them all having engines.

When it came to the sailing legs, Molly was unsurpassed. Despite appearing to be an old boat with an old-fashioned sailing rig, she is very speedy under sail thanks to her hull design and large standing lug-sail rig.

The Whalers would often start at the rear of the fleet and then sail through it to the front, nearly always arriving first at the target destination.

She was much admired on the way from all sides.

The Whalers’ next sailing outing is to the Firth of Clyde where she will take part in this year’s English Raid from July 22 to 27 (www.raidengland.org).

If you would like to know more about the Whalers, please call Geoff Probert on 07795 382453 or visit www.henleywhalers.org.uk