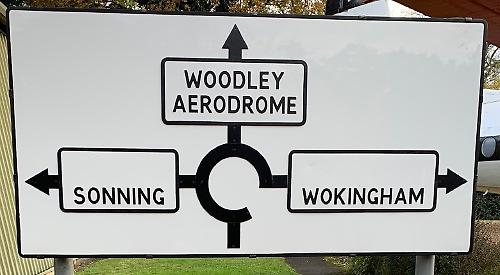 THE subject of the November talk to the History of Reading Society was “The heroes of Woodley airfield”.

The speaker was Joy Pibworth, a member of the society’s committee who lives in a house built on the site of the former airfield.

Today, the site has been absorbed by the relentless urban sprawl of Reading.

The western half is now a trading estate and some of the surviving airfield buildings have been put to new uses there.

The eastern half was acquired for residential development in 1979 by the housebuilder Bryant.

Many of the estate’s road names are evocative of British aviation history — Comet Way, Hurricane Way and Spitfire Way to name but a few.

In 1913, Henri Salmet landed his Bleriot biplane at Woodley Farm during the Daily Mail Tour of Britain.

He gave local people rides in his aircraft and among them was Arthur Russell, of Swallowfield Park.

In 1914, a crowd gathered in the same field to observe pilot Gustav Wilhelm Hamel demonstrate a Morane-Saulnier aircraft.

Later that year he went missing when flying across the Channel.

In July 1928, with the interest in private aviation in Britain growing, a group of flying enthusiasts held a meeting at the Cork Street Garage in Reading.

The outcome was the establishment of the Royal Counties Flying Club and its first chairman was Arthur Russell.

Soon afterwards, it changed its name to the Berks, Bucks and Oxon Flying Club but the members needed aircraft and an aerodrome.

In November 1928, the owners of the Reading Motor Exchange, Jack Phillips and Charles Powis, purchased 130 acres of arable land at Woodley Farm and established the airfield.

The Reading Aerodrome opened at Easter 1929. It comprised a clubhouse for members, several garages and a hangar.

The core business for the new aerodrome was the training school for pilots and hosting air displays. A significant event in the aerodrome’s history occurred in June 1931 when the aircraft designer Frederick George Miles, accompanied by his business partner and future wife, Maxine (Blossom) Freeman-Thomas, made their first visit to the aerodrome to deliver an aircraft.

In 1932, the couple were looking for a site to manufacture aircraft they had designed.

Eventually, they chose to locate the factory at Woodley Aerodrome and would go into partnership with Charles Powis who by then had a controlling interest in the airfield.

The business, originally known as the Miles Aeroplane Company, completed its first prototype aircraft, the Hawk, in 1933.

Such was the company’s reputation that in 1937 the RAF placed an order for 500 of the company’s pilot training aircraft, the Magister.

With the decline in military orders after the war, the company was declared bankrupt in 1947 and it was acquired by Handley Page.

Among the famous aviators to appear at Woodley, perhaps the most memorable was Douglas Bader.

In 1931, he was part of a visiting RAF aerobatics team.

During a display he crashed his aircraft while attempting low-flying aerobatics. He was treated for his injuries at the Royal Berkshire Hospital in Reading. Both his legs had to be amputated and he was fitted with prosthetic limbs.

Today, among the most tangible reminders of the area’s aeronautical past is Land’s End House, the home which Frederick and Blossom Miles had built for themselves in 1932.

In 1993, on the site of the former aerodrome, the Berkshire Aviation Museum opened. Among its exhibits are aircraft built at Woodley by the Miles company.

Joan Dils will be the speaker at our next meeting on the subject of “What did newcomers do for Reading c1400-1960?”

The meeting will take place at Abbey Baptist Church, Abbey Square, Reading, on Wednesday, December 11 at 7.30pm. All are welcome; admission £2 to non-members.