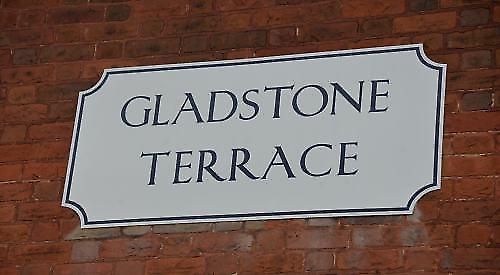 THE executive committee of the Henley Society is pleased to report that the response from sponsors to our 2019 project has been fantastic. Thank you to you all.

As a result, we have now completed nine of the 17 terrace house signs we originally identified. Six more are ordered and awaiting the attention of our master signwriter Brian Allum.

We have funding, either received or promised, to cover several more.

Since we started this project it has come to our notice that there were several signs around the town which we missed and we are hoping to raise sufficient funds to reinstate these too.

Brian continues to give us prompt and efficient service, although progress in reinstating signs has been hampered by the recent wet weather.

Brian is a delight to work with. We are extremely lucky to have him on board.

Our latest completed sign is for Gladstone Terrace which occupies a very prominent position on Reading Road (opposite the monumental masons). It will gain much attention from the many users of that road.

Gladstone Terrace covers numbers 29-47 Reading Road. The two-storey, red brick cottages with slate roofs were built in the early 19th century and are Grade II listed. The sign is above numbers 37 and 39.

In addition to our signage project, society executives have been busy in the public participation section of Henley Town Council meetings where we have drawn the attention of councillors to three areas of concern.

First was the proliferation of advertising boards on the pavements in Henley town centre.

We found 76 on the four main shopping streets with some retailers having as many as four outside their premises, causing obstruction to pedestrians, wheelchair and pushchair users and the old and infirm.

As a result the council has come up with a new code of practice for the use of
A-boards restricting each premises to one board each, as a compromise, we believe, for both pedestrians and shopkeepers.

Secondly, we drew attention to the lack of parking control at Townlands Memorial Hospital which meant that patients and staff were unable to park due to the area being used by shoppers and town workers.

Councillor Ian Reissmann made representations to the NHS department responsible and we now have new contractors controlling the car park for the benefit of patients and staff alike.

Thirdly, the condition of the lavatories in the Greys Road car park were found to be in a poor state and reflected badly on Henley.

The toilets are the responsibility of South Oxfordshire District Council.

The society brought this to the attention of the town council and the Mayor Ken Arlett and town and district councillor Stefan Gawrysiak held meetings with district council officials.

We are now promised that money will be made available by the district council in its budget for 2020/21.

We are now an energetic civic society focused on protecting and, where possible, enhancing the quality of life for Henley residents. We try to take a longer view for the town and its residents.

The aims of the society include:

•Conservation and enhancement of the town, its waterfront and its setting.

•Preservation of the town’s historical centre, its fine approaches and its trees.

•Ensuring an appropriate balance is struck between housing, a vibrant town centre and the provision of employment and leisure.

The society is non-political and is not simply a preservation society.

Our planning committee, under the chairmanship of David Whitehead and his team of experts, scrutinises every application and comments accordingly.

Our membership has grown and is now around 250 and we seek to grow that number this year.

The society will be organising various talks and visits to places of interest in 2020.

For more information, visit www.thehenleysociety.org where you can download a membership application form.