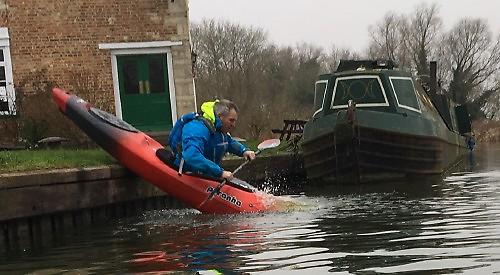 MEMBERS of Henley Canoe Club took their first trip of the new year to Honey Street in Wiltshire on Saturday, January 25.

They met at the Eyot Centre and selected boats and other items of equipment which were loaded into cars for the journey.

They travelled to the Barge Inn in Honey Street, which is located beside the Kennet and Avon Canal near Devizes.

A white horse carved into the hillside of Pewsey Downs is normally visible from the towpath but on this day it was totally hidden by low cloud, which made conditions cool and slightly damp.

The group, which comprised two canoes and six kayaks, launched and paddled eastward for about an hour on easygoing flat water.

It would be nice to report that a whole host of waterfowl and birdlife was spotted along the way but in the grey conditions very little was seen.

We turned and headed back to the Barge Inn, which was both warm and welcoming. A variety of delicious meals were enjoyed before the return journey to Henley.