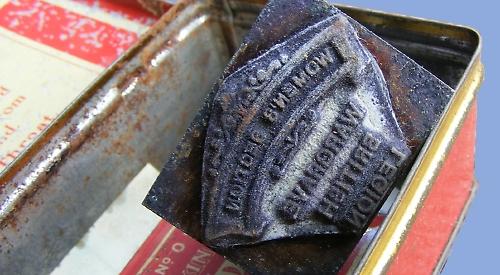 THE March meeting of the Wargrave Local History Society began with the annual meeting, when the past year was reviewed, a new committee elected and details of the 2020-21 programme were given.

Following the formal part of the evening, society secretary Peter Delaney gave a “Dip into the archives”, a look at some recent additions to the society’s collection.

As well as some 400 original postcard views of the village and 1,800 or so photographs, dating from the 1870s onwards, the collection includes 19th century copies of the parish magazine, a full set of Wargrave News, maps, plans, sale catalogues and documents relating to village organisations and charities.

The society also has various artefacts, from milk bottles from village dairies to part of an American bomber that crashed locally in 1943.

Among the new acquisitions were some previously unseen photographs.

The society had also been asked if it would be interested in plans for the planting of trees in the village. These turned out to be more interesting than they sounded as they dated from the early 1900s and were still in their original envelope.

The plans also showed proposed new roads, one of which was never built, one which was built at about the time of the plan and a third which was only constructed in the Eighties. Another set of documents included a set of charity account books and receipts for various old Wargrave businesses, while a programme for a 19th century Wargrave horticultural show made an interesting comparison with a similar event in the Seventies.

Not every item added to the archive is “old”, for example, sales particulars for properties in the village. They make for an interesting comparison with similar items from the last century.

The society is always interested to add items of village interest to its collection to preserve them as a record of the people, buildings and events in the village.

The next meeting will be on Tuesday, April 14 when former employee and company archivist Thomas Macey will recall the history of Jackson’s of Reading, the last family-owned department store in the town.

On Tuesday, May 12, renowned local historian Dr Margaret Simons will tell us about “Reading in the First World War: The Home Front 1914-18”.

Reading library’s local studies specialist will reveal the history of the Grade II listed 18th century Regency-style mansion house on the west side of Reading.

July 14 — Visit to the Kennet and Avon Canal.

We will have a peaceful afternoon journey by barge on the Kennet and Avon Canal from Hungerford to Wire Lock and back while enjoying a cream tea.

September 8 — Berkshire during the Civil War by Joan Dils.

The president of the Berkshire Local History Association makes a return visit to tell us about Berkshire during the turbulent times of the Civil War period.

The road names of this part of Woodley are a tribute to interesting and pioneering aviation and Joy will tell us of some of the people associated with it.

Reading Abbey dates from 1121 and the site has recently undergone a major conservation project. John is the secretary of the Friends of Reading Abbey and co-author of a book about the abbey.

January 12 — The Story of Sheeplands by Andrew Cardy.

Andrew grew up on Sheeplands Farm and was very much involved with the running of the farm shop and later he set up Riverways Farm. He will give us a personal insight into the history and operation of both.

David returns to tell us about another little known topic. The oldest known hospital in Berkshire, it has royal foundation and was linked to a medieval hospital that stood at Cemetery Junction in Reading.

Our meetings are held in the meeting room at the Old Pavilion on the recreation ground starting at 8pm.

For more information, call Peter Delaney on 0118 940 3121 or visit www.wargravehistory.org.uk