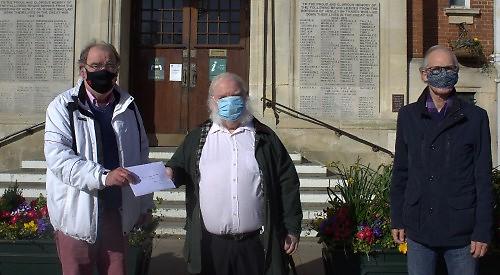 WE are aware that the reach of the society is extending but we didn’t realise it was as far as Australia.

Early in March, our secretary Karen Grieve received an email from Melbourne. It was from an Englishman who lodged with a family in Gainsborough Crescent in the late Fifties.

He was seeking to link up with them after 62 years and wondered if we could help.

Within 36 hours of receiving his request, we had connected him to one of the family living in the Camberley area. Needless to say, he was delighted.

Our first talk via Zoom was joined by about 85 viewers, members and guests, and from the reactions afterwards was well received.

Michael Redley, a new member, gave a well-researched and interesting talk entitled “Aldermen and mayors: life in Henley before World War One”.

Michael is a Henley resident who teaches in Oxford and has spent lockdown researching the history of our wonderful town.

We are hoping that he will give us another talk, perhaps later in the year.

Our membership drive, which began in early February, has exceeded all expectations with 231 members joining us, taking our total membership to over 500, the highest level since the late Seventies.

This compares to a membership of 253 at the time of the last annual meeting in September.

We welcome all new members and look forward to your participation in our events in due course.

Thanks to all the executive committee, under the direction of Julian Brookes, who did the “hard miles” in making the house-to-house leaflet drop around town.

The 200th member to join during the campaign was none other than local historian and former railwayman Norman Topsom OBE.

We are still in talks with St Mary’s Church regarding the repairs to the railings and estimates are awaited.

We are also talking to uhe town council and Phillimore family about the repair of the Phillimore fountain which is located near the church.

Our offer to fund the trial of two solar compactor litter bins in the town centre is still “live” and a final decision by the council on whether to accept our offer is awaited.

Catherine Notaras, together with the Henley in Bloom committee, plans to plant primroses in the Townlands Memorial Hospital gardens but this is on hold due to the pandemic.

However, our plan to plant trees on the southern entrance to the town are well advanced.

The Raymond Youle commemorative plaque has been restored. It will shortly be replaced in its original position in the Gravel Hill amenity area thanks to the council’s parks team.

It is our intention to revive our treasures and eyesores initiative and we invite members to identify features around the town that they would like kept and improved.

A classic example of a treasure is the Phillimore Fountain, which has stood outside St Mary’s Church for more than 100 years and before that was at the town centre crossroads.

A good example of an eyesore is the overbridge at Mill Lane.

This is owned by Network Rail with whom we are in touch in an effort to have it sandblasted and repainted.

If you have features that you would like considered. please email our secretary Karen Grieve at grievehc@gmail.com and we will take a look.