Stand-up's here to help us play our cards right 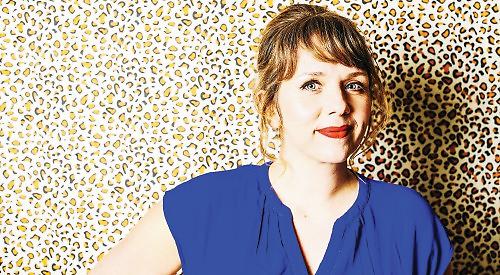 LIKE a breath of fresh post-summer air, the comedian and actress Kerry Godliman taking her acute intelligence and rapier wit on tour for a further helping of “Stick or Twist”.

You may remember her from such TV shows as Ricky Gervais’s Channel 4 series Derek, where she played the ultra-caring care worker Hannah.

She also had roles in Miranda, Carters Get Rich and Extras, as well as the recent Christopher Guest mockumentary movie Mascots, while the Londoner has also had her own Radio 4 show, Kerry’s List.

Her stand-up show Stick or Twist zeroes in on asking why people take certain decisions and make particular choices in life.

Especially when it comes to that potentially existence-transforming (or ruining) moment when they start to think about moving house, city or country.

“It was prompted by whether I should move out of London with my family,” says Kerry. “But it opens up beyond that to why people live where they live — some people choose it, others are forced to stay where they are or forced to move. Whether I’m happy where I live is the 64 million dollar question.”

As the comic acknowledges, this is an age where we are constantly being encouraged to consider alternatives to everything, but nowhere is this more prevalent than in decisions behind where we permanently lay our hats and put down our roots.

“Generations ago, people were born somewhere and lived there and died there. Whereas now, people go on Rightmove on a daily basis to find out what they can get for their house. It just seems as though we are
24-hour consumers considering alternative lifestyles all the time.”

By some weird quirk of coincidence, her Stick or Twist tour will be up and running again this autumn at the same time as her latest — rather similarly-themed — sitcom airs on ITV.

“I’ve fortuitously just made Bad Move with Jack Dee and which plays into the same stuff as my show.

“It’s a pre-watershed family sitcom about a couple who live in the city and decide to throw it all in to move to the country but it’s a disaster for them. It’s got a really lovely cast — Miles Jupp is in it and Philip Jackson plays my dad.

“Jack had watched a lot of Escape to the Country and kept seeing a lot of disaster stories where people sold their house, bought dumps in the country and just ran out of money. So he built a sitcom around that idea.”

While Kerry began work on her show around this central theme of change and moving, it seemed to wander into some familiar areas of concern for her.

“It was originally about considering moving and then questioning why and how where you live influences all other parts of your life such as your friendships and parenting choices.

“And it seemed to open out into things that I’ve covered before. When you do a few shows, you do notice that you revisit things. Parenting is an ongoing subject where you look back on your baby jokes with nostalgia and as they grow up, your material also changes with them.”

And so in Stick or she will reflect on why she has kept her own children’s baby teeth in a box.

“I didn’t keep them on purpose, I just did the tooth fairy thing and threw them in a box which I then stumbled upon recently and thought, ‘What am I going to do with that?’ I mean, they’re just teeth at the bottom of a box, which is a little bit macabre and sort of voodoo. They’re quite pristine. They haven’t gone rotten, which I think is a measure of my good parenting. That routine is about sentimentality and about why we keep every memento of their childhood, their hair and every birthday card they’ve been given and taking millions of photos of them — to what end?”

Friendship is still an area which Kerry believes will provide a great source of material — particularly the ever-evolving (and occasionally warped) nature of companionship in this technologically-centred age.

“That’s all changed because of social media and the way we conduct our friendships has become quite administrative. I do Twitter but I’ve had to step away from Facebook. People just know everything about everyone else now and it’s killed . We can’t do exposition anymore. You can have a debate with someone about spurious facts and then someone will google it and have actual knowledge. Can’t we just meander around half-knowledge?”

Part of her stage persona is to be constantly bewildered at the stuff life throws at you. Turns out that in the real world, Kerry is just as perplexed.

For now, she’s bewildered at politics and the rise of divisive figures like Donald Trump. “It’s like they’ve got Yosemite Sam as president.”

She’s also confused about the TV shows that get made over others which never reach beyond a pilot episode stage (she’s been there).

And she’s also quite befuddled at the modern teaching methods which enter her home now that she has school-age offspring.

“I am bewildered about my children’s homework. Phonics bewilders me, but that’s how they do it. My husband went to a phonics workshop and that was bewildering.”

Bewildered or not, the last couple of years have proved to be highly successful for Kerry. As well as taking more of her stand-up show across the country, her extensive acting CV has been enhanced.

She had a major role in Netflix movie Mascots, the latest mockumentary film by Christopher Guest (This Is Spinal Tap, Best in Show) about a competition for the top sports mascot around the globe.

“That was a dream which came out of nowhere. Christopher Guest had seen Derek and enjoyed Ricky’s work and liked me and invited me to be in his film. I’d never been to LA before and suddenly you’re on a film set with Parker Posey and his ensemble of actors and you’re thinking ‘Is this real?’”

Also very real was the success of the Sky One series Carters Get Rich in which she starred alongside Dawson’s Creek legend James Van Der Beek, which had a fortunate knock-on effect at home.

“I had a lot of fun making that and it was lovely to sit in front of something that my kids could because Derek and my stand-up really appropriate for them. My mum-guilt about absenteeism was balanced out by being able to show them evidence of where I’d been. It was quite fun and accessible and they enjoyed it. Not sure if there will be more and the kid who played the lead has probably got a beard by now.”

⚫ Kerry Godliman plays the South Street Arts Centre in Reading on Saturday, December 9. She is also appearing at South Hill Park in Bracknell on Thursday, December 7. For more information — including a full list of tour dates — and to book tickets, visit www.kerrygodliman.com