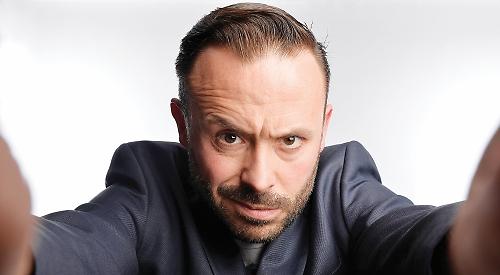 HE’S a former English teacher turned stand-up comedian who grew up on a council estate.

A star of Live at the Apollo and The Mash Report, Geoff Norcott is also a former Labour voter turned Liberal Democrat voter turned, er, Conservative voter and Brexiteer.

In any other walk of life there would be nothing remarkable about that, but the vast majority of today’s comedians prefer to project a left-liberal image.

It’s a tendency that likely has its roots in the overwhelming success of the alternative comedy movement that started life in the late Seventies as comedians’ answer to punk rock.

A mere 40 years on, the pendulum has started to slightly swing back in the other direction, with entertainers like Norcott among the perceived transgressors against mainstream opinion.

That doesn’t mean he’s about to start mocking the disabled, as one critic suggested. Both Norcott’s parents had conditions that came under that heading — something he talked about on stage during his 2016 Edinburgh Fringe show, “Conswervative”.

Having since supported the hugely popular Canadian stand-up Katherine Ryan on her sold-out UK tour, Norcott is now back on the road with his new show — the intriguingly titled “Traditionalism”. So what’s this one all about?

“Politics and social attitudes are changing at a dizzying rate,” he says. “I’m like a lot of people in the middle — I want to hold modern views but the labels we use are changing so fast it’s almost impossible to keep up. If you go out of the country for a month you come back and something else is now deemed offensive. I got called a ‘dinosaur’ for the first time recently. Well just like dinosaurs I hear men like me are soon to be extinct, I might as well have a laugh about it before the meteor strikes.”

Would Norcott, 41, describe himself as a traditional sort of bloke? “I guess my relationship operates on a very gender-typical basis. I think a lot of people’s still do, yet the chattering classes are engaged in fervent debate about gender neutrality. I think male and female characteristics are slightly more innate than that. Having a baby brings issues like this into focus. Right from the start my son was visibly more at ease with my wife around. And why not? She could feed him with her body, I couldn’t even do it with a spoon.”

Why are there so few comics on the right, does he think?

“Being a Conservative and Leave voter in the world of stand-up is reasonably out there. Those views are pretty common in wider society, but in a comedy dressing room it’s the equivalent of a Scientologist giving Mass.

“Historically the alternative scene was a reaction to the stand-up of the day. Even though that was ages ago, some lefties cling on to this view that any right-wing comedian must be unpleasant — it’s so unlike the left to get their big ideas from the Seventies. If anything, me not turning out to be a totally evil git seems to annoy them more.”

With the failure of traditional election polling methods having been blamed on “shy” Tories, why does Norcott think Conservatives find it difficult to be out and proud about their political beliefs? “It’s a learned behaviour. You try to have grown-up conversations but when the very act of voting for a mainstream political party is called ‘murdering’ or ‘fascist’ it makes you more likely to keep the discussion to less contentious subjects — like Israel or the inevitability of death.”

Norcott plays Norden Farm Centre for the Arts in Maidenhead on Saturday, March 10, at 8pm. With the prime minister also serving as the local MP, the constituency has been caricatured as Tory Central, but does Norcott have any links to the area?

“As a Conservative voter I’m delighted to bring the tour to Theresa’s home turf. Though as a precaution I’m bringing plenty of cough sweets and putting up any signage myself.”

With Brexit continuing to dominate the headlines day in, day out, what’s Norcott’s take on it?

“Well, I voted Leave and I’d like to say that yes, I did realise it would be this complicated, and I absolutely thought through all the ramifications of a hard border in Northern Ireland and...” he pauses. “Look, I don’t regret my vote, but it’s tricky. I might not be able to make jokes in support of Brexit, but I can certainly crack a few at the expense of certain Remainers. You know, the ones who developed this lifelong love of the EU the moment the vote went the other way. And they go on the marches, but only if it’s on a Saturday and they can factor in brunch at Browns.”

It’s good to have a laugh about this stuff, but does Norcott ever have to face down furious members of the audience?

“Sometimes people get triggered. Corbynistas cannot take jokes at Jeremy’s expense. I was at a gig in Bristol and remarked that Corbyn looks like a pensioner at a service station who thinks he’s lost his coach party. One lady got up and said ‘Stop being mean about Jeremy!’ Which was fine, but the previous comic to me had been making jokes about Theresa May’s appearance and she’d laughed throughout. I made that point and she stormed out, ironically
no-platforming herself.”

• Geoff Norcott’s “Traditionalism” tour has been extended by popular demand, with an autumn leg now on sale. For more information, including a full list of dates and to book, visit www.socomedy.co.uk/
artist/geoff-norcott