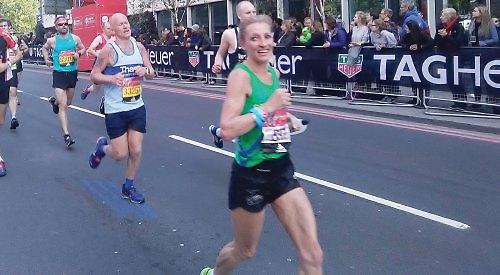 A WOMAN from Henley won her age category when she ran the London Marathon in under three hours.

She won the category for women aged 45 to 49 and was the 47th woman overall to cross the finish line at the 37th annual event on Sunday.

Mrs Hoskins, of Watermans Road, said: “I never have a race plan, I just run how I feel on the day because that’s the sort of person I am.

“I made sure I kept a little bit back so I had enough energy in my legs for the last three miles.”

Mrs Hoskins, who belongs to the Reading Roadrunners and has taken part in about 10 previous London Marathons, suffered an injury in the summer which prevented her from running for 12 weeks.

She built her strength back up by cross-training and swimming.

She said: “I swam more a lot over the last few months and I guess having that time off running has made all the difference as it has done my body the world of good.

“When I did my first marathon I finished it in something like four hours and seven minutes, which is still a good time, but I appear to get quicker as I get older!”

Henley trio Tim Dickson, Miles Saunders and Tony Chidwick ran the marathon and raised a combined total of more than £12,000 for their chosen charities. Mr Dickson, 44, of Greys Hill, finished in three hours and 44 minutes. 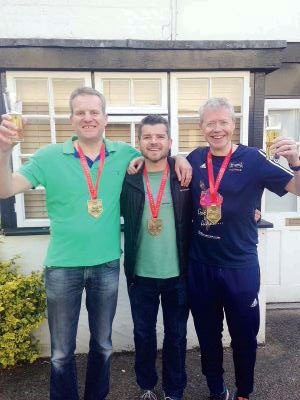 The men met through Sacred Heart Primary School in Henley where each has had two children and are regulars at the Bird in Hand pub in Greys Hill.

Mr Dickson was raising money for the Rainbow Trust, which supports the families of children with a life-threatening or terminal illness.

Mr Saunders and Mr Chidwick were both running in aid of the Berkshire MS Therapy Centre.

Mr Dickson, who works for Invesco Perpetual in Henley, said: “It was a fantastic race. Everybody always talks about the crowd and we had a lot of family up with us and we saw them along parts of the course and they shouted our names.

“For me, the period between 16 and 20 miles was the toughest because you feel you have been running for a long time when there is still a long way to go and you are not making any progress.

“When I got to the 20-mile mark and turned west I felt lifted and from then on it was quite straightforward. It was different for Miles who at that stage had hit a bit of a wall.”

After the race, the trio came home and had a celebration meal at the Zizzi restaurant in Henley with friends.

Mark Hill, 37, of Swiss Farm, Henley, finished in a time of four hours and 29 minutes. He ran in memory of his mother Joyce, who died in 2014, and raised about £1,400 for Diabetes UK. Mr Hill said: “I really enjoyed it but I didn’t get the time of sub-four hours that I wanted. I tried hard but I got awful cramp in my left leg at 18 miles. 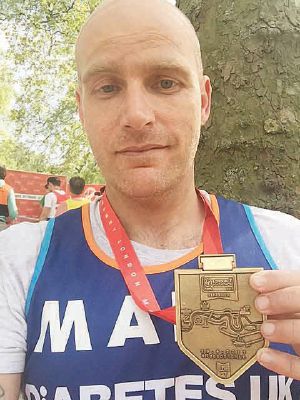 “By mile 23 I was in such agony I could hardly run — the Queen could have gone past me and I wouldn’t have noticed.

“It was so painful running down The Mall but I bit my lip and got on with it. I had my name on my vest and everyone was shouting my name, which was great, but by the end, when I was walking it started to get a bit annoying with people saying, ‘go on, Mark’.

“When I finished I said to myself that I was not sure if I would do it again but now I have recovered I want to try again and beat my time.”

Andrea Peart, 45, an HR consultant from Remenham, finished in a time of five hours and two minutes. She said: “I am a bit disappointed with the time but, for my first one and not knowing what to expect, I was pleased that I got round and I have felt not too bad. I am not aching but I am absolutely tired.”

Mrs Peart, who raised about £1,500 for Sports Aid, which supports and funds aspiring Olympians and Paralympians, said she would do it again.

“I was even looking online and to see if I could do one later this year,” she said. “It was all really motivational with the crowd behind you.”

Actress Jo Southwell, 42, from Aston, finished the race in four hours and 55 minutes. 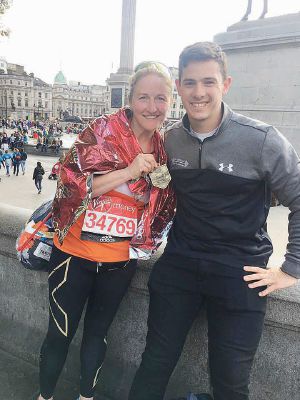 She raised £1,500 for Alzheimer’s Research UK as her father Alan Kelly suffered from the disease.

Mrs Southwell said: “It was an absolutely amazing experience. The amount of people who were there and the spirit of the crowd were unbelievable.

“I had ‘Jo’ written on my front and ‘Go Jo’ on the back and it made such a difference because people would shout your name.

“At one stage I heard people shouting for Jo and then they saw the back of my top and said, ‘there’s another Jo — go Jo!’.”

She was supported by her son Joe and his girlfriend Mia Spicer, who followed her around the course.

Police officer Iestyn Llewellyn, 39, from Goring, finished in a time of five hours and 20 minutes. 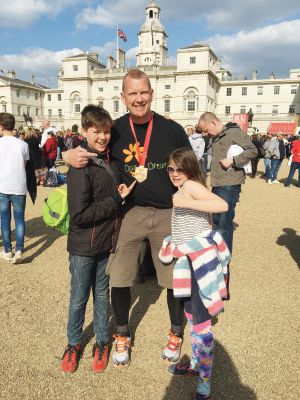 He suffered an injury at the 16-mile mark, which slowed him down.

Mr Llewellyn said: “It wasn’t bad but I had a shin splint so the last 10 miles was slow and painful.

“It was also a bit too hot for me but I enjoyed every second of it even though I was in pain. You just remember why you are doing it and all the charities that are there.”

He was supported by his family and friends along the course which he said “made all the difference”.

“I have run London previously but my family and I agree that the atmosphere was so much better this year than previously,” he said.

“I saw them a lot more on the way round than I have done before and it is them that give you a real boost as you go round, whether it’s a high-five or them just shouting your name. It pushes you forward.”

Mr Llewellyn raised about £1,000 for Daisy’s Dream, the Twyford charity that supports children and their families after bereavement.

Solicitor Nicola Robinson, 43, from Whitchurch Hill, come home in three hours and 54 minutes. She said: “Finishing in sub-four hours was my target and I achieved that, which is great. 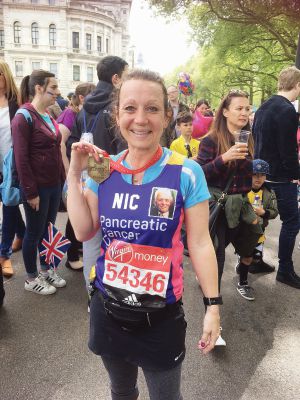 “The organisation of the entire event was just seamless and there was such an amazing camaraderie among the runners where everybody was helping each other.”

Mrs Robinson was running in memory of her father, Brian Mount, who took part in many marathons before he died of pancreatic cancer last year, aged 79.

She said: “I was running with a picture of my dad and I had people who I had never met before running alongside side me saying ‘your dad would have been so proud’, ‘keep going’ and ‘congratulations’. It was really heartwarming.”

Annette March, 28, owner of the White Gdn florist in Hart Street, Henley, finished in four hours and 51 minutes. She raised about £1,000 for Bloodwise. 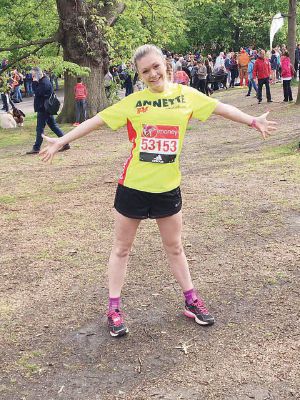 She said: “It was a hard race as it was a warm day but everyone was helping each other and with it being St George’s Day, it felt quite patriotic with everyone on the streets of London waving flags.”

Francis Highton, 26, of Upton Close, Henley, and a member of Henley Rowing Club and Leander Club, crossed the line in three hours and seven minutes.

He said: “It was harder than I expected given my background but the atmosphere was unbelievable as everyone there appeared to be cheering for everyone else.”

Olympian Sarah Winckless, from Hurley, who is a steward and umpire at Henley Royal Regatta, finished in four hours and 32 minutes.

She raised £2,315 for Leukaemia Care, which she chose as her mother Madeleine was diagnosed with chronic lymphocytic leukaemia in 2009 and still needs regular check-ups.

Miss Farmar said: “The weather was fantastic and the support from everyone there was amazing. I was pretty comfortable the whole way round so my training definitely paid off.”

Liz Winton, a 43-year-old childminder from Watlington, completed the course in five hours and 31 minutes while wearing a rhino costume and raised more than £5,700 for Save the Rhino.

The former parish councillor, who also took part in the event in 2014 and 2016, said: “I felt like a celebrity with people wanting to take selfies and pictures all the way along.

“People were shouting my name and chanting ‘rhino!’ and patting me on the back. It was great.

“It was really hot in the suit. It rustled when I moved and it made me lean forward so all I could see were people’s bottoms and calves and I couldn’t hear very much.

“When I got to Tower Bridge, where my husband and children were, I raced past them because I couldn’t see them so I had to go back.”

Annabel Blackwell, 45, from Harpsden, finished in three hours and 59 minutes, raising more than £4,000 for Shelter homeless. 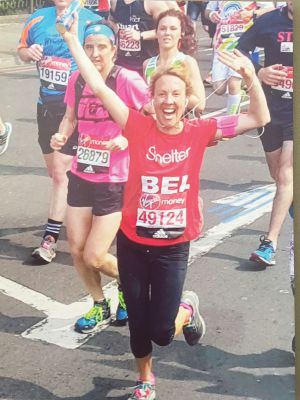 Mrs Blackwell, a practice nurse at the Bell Surgery in Henley, said: “I was pleased to achieve sub-four hours as that was my target.

“The crowd, particularly my family and friends, gave me a lift that got me round.

“I was on a high on Monday and when I went back to work on Tuesday I showed my medal to the staff and patients, who have all been really supportive.”

Chris Barton, from Henley, finished in three hours and 22 minutes. He was running for Parkinson’s UK in memory of his grandfather who had the condition and his grandmother who now has it. He raised £893.

DJ Gary Boys, of River Terrace, Henley, had to pull out of the race for health reasons.