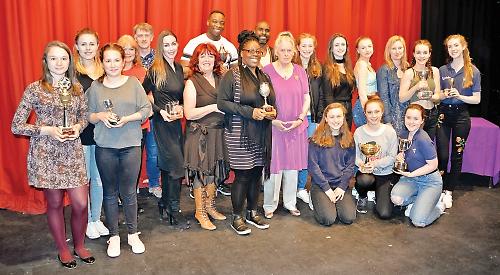 THE organisers of the Henley Drama Festival have announced the winners of this year’s event.

The festival, which ran from Tuesday to Friday last week at the Kenton Theatre followed by a gala night on Saturday, saw 13 one-act plays entered in total — up from 11 last year.

She added: “The standard was very high this year, which made the adjudicator Julie McLoughlin’s choice very difficult.”

Competition took place across four categories rather than the usual five, as this year there was no all-woman production entered.

There were a further nine special awards across the different categories.

In Class I, the open category, the Kenton Drama Award was won by the Henley Amateur Operatic and Dramatic Society (HAODS) for Bethlehem Lights. Class I runners-up were Didcot Phoenix Drama Group with The Lesson. They took home the Weatherhead Award.

In Class III (senior youth) the Reg Judd Award went to The Young Theatre for The Cagebirds.

In Class IV (junior youth) the Daphne Marshall Memorial Award was won by Stageworks’ The Hitch-Hiker.

Class V — best original play — remains one of the most prestigious awards. This year it went to Michael Ashton of HAODS, the writer of Bethlehem Lights.

The Cagebirds was also the adjudicator’s choice, winning the Jean Sutherland Memorial Award.

Finally, the Diamond Shield Award for “magic moment” went to Didcot Phoenix Drama Group for the professor’s first appearance in The Lesson.