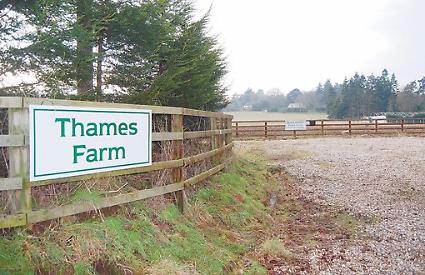 THAMES Farm is the best possible place for housing, an inquiry heard.

Owner Claire Engbers wants to build 95 homes on the site, which lies between Henley and Shiplake, off the A4155 Reading Road.

An outline planning application was refused in September amid opposition from Shiplake and Harpsden parish councils and Henley Town Council.

But Christopher Lockhart-Mummery QC, who is representing Mrs Engbers, of Norman Avenue, Henley, told the hearing at Nettlebed Village Club on Tuesday that the development would help ease the town’s need for affordable housing.

He said: “House prices in Henley are, unsurprisingly, among the highest in the country. They are completely out of reach for many people. The need for affordable housing is therefore as acute here as anywhere.

“The supply of affordable housing has been, is, and will be dire. The provision of 38 affordable dwellings, of a size and tenure requested by the district council, will be a substantial benefit of the development. Consideration of these matters is simply ignored in the district council case.” Mr Lockhart-Mummery told the hearing that Thames Farm is not restricted by the Area of Outstanding Natural Beauty and is not prone to flooding.

He added: “Henley is substantially constrained by an Area of Outstanding Natural Beauty and flooding. The appeal site is wholly unconstrained. It has no protective designation — where better to find a much-needed contribution to the requirement?”

Mr Lockhart-Mummery also claimed that there would be no issues with access to the site and there have been many years of “uncontradicted evidence” showing that this section of Reading Road was a “safe stretch” of highway for pedestrians and cyclists.

“There is no reason to contend that this will change following the proposed development,” he said, which caused disapproving scoffs from some of the 30-plus members of the public who attended the opening day of the hearing.

Thames Farm was not included in the joint Henley and Harpsden neighbourhood plan, which names 11 sites where about 500 homes should be built by 2027, and was approved at a referendum in March last year. However, in March, the district council revealed that the town may have to find room for more than 1,200 homes.

Mr Lockhart-Mummery claimed that the neighbourhood plan was therefore effectively out of date.

He told the hearing that in all recent decision letters the strategic housing market assessment, a Government backed report, had been taken as the basis for planning for housing.

He explained: “It follows that the housing policies in the development plan — including the neighbourhood plan — are obsolete in their failure even to attempt to provide for housing requirements as required by the [national planning policy] framework.

“The strategic housing market assessment April 2014 sets the benchmark for housing provision, and appeal decisions have consistently determined that the principal policies relied on by South Oxfordshire District Council are out-of-date, and should be afforded very little weight.

“This applies equally to the neighbourhood plan. The hierarchy and distribution of housing development which they set are necessarily based on historic housing requirements and are therefore obsolete.”

But Robin Green, for the district council, said the reasons for refusal of the original application last year still stand.

He said that while the council acknowledged the proposal was a “modest improvement” on an earlier scheme for 110 homes on the site he added: “In essence the scheme is the same. While the parties may disagree about the extent of the harm caused to the character and appearance of the area, harm there would undoubtedly be.”

Mr Green also raised concerns about the proposed pedestrian crossing to allow residents of the development to cross Reading Road to reach facilities via Station Road.

He said: “At the proposed crossing there would be inadequate visibility for northbound vehicles, presenting a clear risk of injury on a busy road with relatively fast-moving traffic. It is this crossing that is most likely to be used by parents pushing prams and the mobility-impaired, and the failure to ensure adequate sight lines is wholly unacceptable.”

He said the joint neighbourhood plan embodied the “shared vision” of the communities of Henley and Harpsden and the appeal scheme was “fundamentally at odds” with it.

The inquiry, being held before planning inspector John Braithwaite, continues and is due to conclude today (Friday).