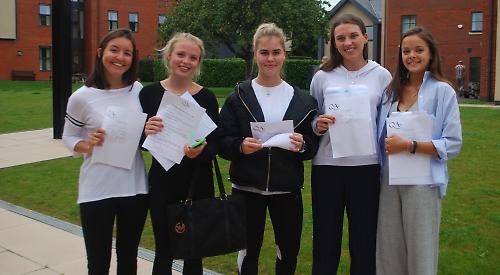 STUDENTS across Henley and the surrounding area are celebrating another set of strong of A-level results.

Nationally the number of top A* to A grades increased for the first time in six years but the number of university places allocated has fallen.

At The Henley College the pass rate for those gaining A* to E grades was 98.2 per cent, beating last year's 98 per cent, and more than three quarters of grades were A* to C, also equalling last year’s record.

More than three quarters of maths students were awarded A* to B grades, while English language students achieved a 94 per cent pass rate at A* to C.

Twenty-six of the college’s A-level subjects saw a 100 per cent pass rate.

Creative subjects also secured excellent results with more than 90 per cent of art students and 80 per cent of photography students gaining A* to B grades.

Many had already checked their results on the college’s website or been contacted by their first choice university to say they had been successful before arriving on Thursday morning.

There were subdued scenes outside the college’s Deanfield Road campus after they'd opened their results envelopes with many planning to celebrate with a meal with their families or a night out in Reading.

At the Piggott School in Wargrave, the overall pass rate was down from 100 per cent in 2016 to just over 99 per cent, although the proportion of grades at A* to B was a record 63 per cent, up from 60 per cent last year.

The percentage of A* to C grades was down by three points to 84 per cent, while the school scored 38 points per A level entry under the new QCA system.

Headteacher Derren Gray said: “Our students and staff work exceptionally hard and this is once again evidenced in each of our academic, applied general and technical results.

“I wish all out students the very best for their future and thanks all the teaching and support staff for their continued dedication and professionalism.”

The number of A* to C passes decreased from 78.6 per cent to 76.5 per cent while the overall pass rate was a fraction below 100 per cent, with only two papers failing.

Head teacher Rachel Cave said: "Parents have told me that the quality of feedback and support their children received was fantastic. It allowed them to prepare well by pinpointing the areas they need to focus on.

"It's a bit of a shame that the sun isn't shining on our proud moment this morning but at least it isn't raining! We're really thrilled for our students and most of them are very happy to have got into the universities they wanted."

The number of A* to C grades increased from 87 per cent to 88 per cent and the school maintained its 100 per cent pass rates.

Headmaster Gregg Davies said: "My congratulations to this record-breaking year group. What strikes me is that almost every pupil has achieved at least one or two top marks each, with an average of 140 UCAS points per student overall, the equivalent of AAB.

"My particular congratulations to the Economics, Philosophy and Art departments for not just excellent value-added scores but also fantastic overall A*-B results.

"The majority of our year 13 leavers are heading for university, with a selection choosing to pursue management and apprenticeship opportunities within the workplace.

"The current figures indicate that 96 per cent of students have got into their university of choice – another record broken.

"The range of degrees that our year 13 leavers are going on to do is remarkable, perhaps reflecting the ever-changing landscape of education and employment, and certainly reflecting the exceptional and individualised careers guidance they receive at the college."

The pass rate remained 100 per cent, the same as last year, but the number of A* to C grades fell from 88 per cent last year to 86 per cent this year.

Headteacher Julia Harrington said: “We are all very proud of our girls and their results reflect what a fantastic year group they have been.

“They all have bright futures ahead of them as they go on to university, apprenticeships and voluntary work – they, along with their teachers should be congratulated”.

Reading Blue Coat School in Sonning were the best in its history. The school saw an increase in top marks with 48.3 per cent of grades being A* to A, compared to 45 per cent last year.

There was a 100 per cent pass rate across all exams, the same as last year.

Jesse Elzinga, headmaster at the school, said: “These results are fantastic and I am so proud of what our pupils and teachers have accomplished.

“As we move to linear A-levels and the government makes examinations more rigorous, I worried we might see a slight dip in our results.

“On the contrary, we have achieved the best results in the school’s history by a considerable margin.

“These record-breaking statistics are of course brilliant for the school, but the many individual success stories are also uplifting.

“I expect today that more of our pupils will be looking at upgrading their university place through the UCAS Adjustment process, rather than looking for places through clearing.

“Congratulations to our leavers on these superb results and I wish them all the best as they embark on their university courses.”

At the Oratory School in Woodcote, 37 per cent of grades were in the A* to A range while the number of A* to B grades was 59 per cent. The overall pass rate was 97 per cent.

Head teacher Joseph Smith said: "We're really pleased with the results and feel the boys and teachers have both done a great job.

"It's been a year of some uncertainty for all schools with the introduction of the new system and the elimination of the AS level exams.

"Nobody knew what the grade boundaries were going to be but the boys worked incredibly hard and the staff were dedicated to supporting them and we're delighted with the outcome.

"This is a really solid starting point and we're looking to build on it over the next three or four years."