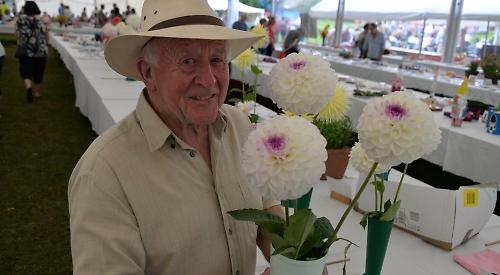 Michael Bradley’s wins included the Konrad Engbers Cup for his display of onions and leeks.

The 66-year-old, of Mount View, Henley, also won firsts for his three onions, each weighing about 4lb, his pair of leeks, each about 17in long and 8½in around, and his tomatoes, shallots and cucumbers.

Speaking in the produce tent at Saturday’s show, he said: “I’m over the moon because you don’t know what you’re going to run into with any new exhibitors.

“I’m quite pleased with the way the veg has grown this year. Most of it will be put back for seeding but we do eat the odd few!

“I used to come here a few years ago but I haven’t been for four or five years. I’ve met a few old friends I haven’t seen in years. I was hoping to do well because I’ve been showing for a few years now and I’m a national veg judge as well. I’ll enter again next year.”

His display of onions, carrots and runner beans earned him the Ray Williams Memorial Cup.

Mr Hedges, 46, of Spinney Close, Emmer Green, also claimed class wins for his cherry tomatoes and runner beans which he grows at home and at his allotment.

He said: “It’s always nice to win but it’s nice just to take part and it’s great to see lots of entries this year.

“I’ve only been coming here four or five years. It’s nice to get some sort of recognition for what we grow and confirm whether you’re doing it right or not.

“I probably sowed the onions in February and March and I had to take them out during the frosts.

“With the runner beans, you have to keep them away from the leaves so that they grow nice and straight and then pick the six straightest.

“I sowed the carrots in May. Until you dig them up you never know what’s there.

“I do this show, Chiltern Edge and Henley so if it’s not ready for one, it’s ready for the other.”

Mr Hedges’s father Keith, who lives in Gallowstree Common, is also a regular competitor at the show.

“My dad’s a landscape gardener so I’ve always had the country in my heart,” said the accountant.

“It’s nice when I’ve been in the office all week to be able to get out and grow stuff. It’s always worth giving it a go if you enjoying growing stuff.”

David Lloyd, of Reading Road, Shiplake, achieved 13 firsts across the vegetable and flower classes. He said: “It’s not bad and is as good as I’ve done in the past.”

Villager Peter Woolsey, who was awarded the Fred Denton Cup for six classes of fruit, said: “I was astounded and totally delighted.”

William Butler, 11, from Woodley, won the children’s planted wheelbarrow competition for the sixth year running with his Red Arrows-themed display.

He was inspired after seeing the aerial display team perform at theFarnborough Air Show.

He said: “I’m relieved because I saw the other entries and thought they were very good. It was stiff competition this year.”

The 69th annual show attracted more than 1,000 entries in classes for fruit, vegetables, jams, preserves, cakes and flowers as well as children’s categories.

The trophies were presented at the end of the afternoon by George Englefield, a long-time resident of Binfield Heath and supporter of the show.

Other attractions included a display of classic cars, a dog show, traditional games, a coconut shy, tombola and a bouncy castle for children. Philip Martineau and his son Tom ran a hoopla stall.

The 27 exhibitors included charities, craft businesses and community organisations such Eye and Dunsden village hall and the Kenton Theatre in Henley.

The Shiplake Vikings had two rowing machines and invited visitors to try to set the fastest time over 250m.

The Binfield Heath Village Society was selling homemade cakes and tea and coffee. There was also an ice-cream van, a barbecue, beer tent and Luscombes’ pop-up restaurant. The Woodley Concert Band performed throughout the afternoon.

More than 1,750 peope visited the show. Chairman Peter Ransom said: “It was a good show in terms of numbers and I think people loved the sunshine.

“We had more entries, much to everybody’s surprise because we had some key competitors who didn’t enter this year.

“The satisfying thing is that a committee with a relatively large number of new members achieved this success.

“It’s really rewarding when you put so much effort in to see people enjoying themselves. I think it unites the community.”

The full results and more pictures will be published in next week’s Henley Standard.