One Elle of a show, but there's even more beneath the surface 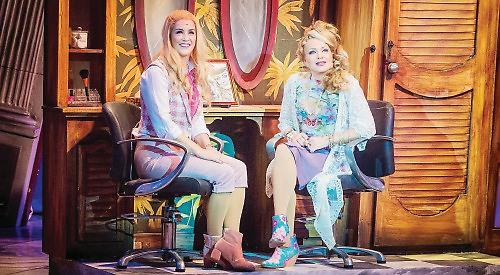 THE songs come thick and fast, the action and scene changes are slick and and near faultless.

But what drives on Legally Blonde is the steady stream of wit and irony in the lyrics.

The funniest song asks if a trial witness — set up as a homosexual stereotype addicted to fashion and appearance — is gay ... or European?

It’s enjoyable having the tables turned on us for a change — we’re only too happy to mock Americans’ lack of culture and subtlety.

And composer/lyricists Nell Benjamin and Laurence O’Keefe have earned their awards for this sparkly, pacy show.

Legally Blonde is 10 years old now and has gone around the world, so it hasn’t got much to say that we don’t already know.

But it says it very well, sometimes exceptionally well, with a standout performance from X Factor finalist and this year’s British Eurovision entrant Lucie Jones.

There is hardly a time when her central character, Elle Woods, is offstage. Jones acts convincingly, dances energetically and sings committedly for two and a half hours without faltering. She is every bit as appealing as Reese Witherspoon in the original film — and that is very appealing indeed.

Rita Simons does a great turn as hairdresser Paulette and Elle’s posse of UCLA sorority soulmates are not thrown away after the opening scenes but form a continuing Greek chorus in another triumph of irony from the writer, Heather Hach.

The story sees Elle being rejected by her long-term boyfriend because he’s going to Harvard Law School and she’s too flighty for his long-term future.

Film school graduate Elle decides to apply to Harvard to follow him and try to change his mind. She gets in to her own and everyone else’s surprise. The scene is set for embarrassment, misunderstanding and culture clash — and it’s milked to the full.

The choreography is fast, furious and forceful with well-judged routines and timing. And the mobile set is adjusted with ease to oil the scene changes and keep the piece moving.

The design has two themes: blanket pink and blanket drudge — the contrast between the swimsuit shallowness of Elle at the beginning and the serious-minded graduating lawyer at the end.

There are deeper themes to be explored in Legally Blonde about social and professional mobility, faith in ability and so on, but they tend to get smothered in the energy and vitality of the piece.

It’s a shame because if they were allowed to emerge more then this musical might last longer in the mind than the final bows — sadly, for all their wit, none of the songs is memorable.

Part of that might be down to the sound balance, with the orchestra dominating some passages.

But you suspect that’s not why the audience is there — it’s more likely for the explosion of pinkness, the snooty ex-boyfriend’s comeuppance and the sheer warmth of the piece.