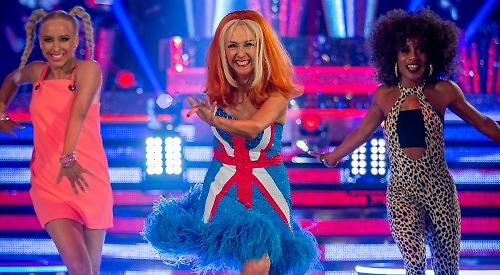 DEBBIE McGEE said she had a “horrible feeling” when she ended up in the dreaded dance-off after her latest performance on Strictly Come Dancing.

The radio presenter from Wargrave had been criticised by the judges for looking stiff and running out of energy during her samba routine with dance partner Giovanni Pernice.

The couple were awarded 33 points out of a possible 40 after performing to a Spice Girls medley at the Blackpool Tower Ballroom live on Saturday night.

The score meant they were fifth on the leaderboard but they didn’t secure enough votes from the public to prevent them ending up in the dance-off before being saved by the judges.

McGee dressed up as “Ginger Spice” Geri Halliwell, wearing a Union flag dress and ginger wig, as they performed to a mash-up of the group’s hit singles Wannabe and Who Do You Think You Are?

The backing singers changed the lyrics to the first number, singing: “Debbie McGee, she doesn’t come for free, she’s a real lady.”

The routine began with McGee in a dressing room with her other “band mates” putting on make-up before they all charged on to the dance floor.

She then spent the routine either out of hold with her backing dancers behind her or in hold with Pernice for the travelling steps and rolls associated with the samba.

The dance ended with her giving her partner a flying “kick”, which knocked him off his feet and drew a huge cheer from the audience. Co-host Tess Daly said to McGee: “You were worried about the bounce but you have the whole place bouncing... and the wig — priceless.”

She then asked “Scary Spice” judge Craig Revel Horwood what he thought.

He replied: “I thought it was a little bit spiky, a little bit stiff. I would like to see the shadow rolls a little bit smoother and ironed out a little bit more but I loved the fact that you dropped into the splits after that and the timing, I thought, was absolutely exceptional.”

Darcey Bussell said: “I loved your shadow rolls. I thought the curve with the upper body got better and better, very impressive, and beautiful. You travelled on your promenade runs as well.

“The only thing I would say is it was lacking in energy by the very end, which I have never seen you do in the past… keep that energy, that stamina, keep it strong.”

Head judge Shirley Ballas said: “You have one of the most amazing vertical lines through your body so everything for you looks easy on the eye. Bruno Tonioli said: “Thank you for bringing Girl Power to the Tower. Geri, by the way, you have never danced better. I love it!

“For me, it was a great tribute to pop icons. It was placed very, very well. It was cheeky, it was funny. I agree with the other judges, those rolls were sizzling — excellent performance, great treat.”

The pair then made their way to the gantry to cheers from their fellow contestants, where co-host Claudia Winkleman asked McGee: “If someone had told you five years ago that you would be in Blackpool Tower Ballroom dancing dressed as Geri Halliwell with this one would you have gone, ‘no, don’t be ridiculous’?”

McGee replied: “I would think they were mad. I just totally enjoyed it tonight — I don’t know what I did but I had a great time.”

On Sunday’s results show there were gasps from the audience when McGee and Pernice were named as the first couple to be in the dance-off.

This meant they had to perform again against Paralympian Johnnie Peacock and his dance partner Oti Mbuse doing a tango to decide who should leave the competition.

McGee, who had received a good luck message from Halliwell, said: “It is just such a horrible feeling but I had a great time and I am going to have a great time now.

“I’ve had a great experience and I’m a performer so I am going to give it my best and that’s all you can do.”

After the repeat performance she blew a kiss to the crowd before being embraced by Pernice.

Peacock and Mabuse then danced for a second time to Sweet Dreams by the Eurythmics.

Afterwards the judges were told to pick their favourite and all voted for McGee and Pernice. A relieved McGee said: “You feel sad for them [Peacock and Mbuse] but you feel happy for yourself because it is such a relief — you just want to get through.”

On Sunday, her BBC Berkshire radio show was being looked after by Sarah Walker and former Strictly dance professional Ian Waite, who talked about his time on the show.

McGee, the widow and former assistant of magician Paul Daniels, was asked by Walker about how she found the samba.

She replied: “All these Latin dances when you have to wiggle your hips I am just not very good at. I’m a little bit rigid.”

McGee revealed she had been using a hot water bottle during the week because the Latin steps were hurting her hip.

She said: “Every dance you’re using muscles you haven’t used before, or for 30-odd years in my case, because the techniques are different.

“Last week I pulled a muscle in my back, which has just healed. This week I was back at the physio because stretching your hip to the side on the samba really pulled the muscles over my hip bones.

“In one of the rehearsals, it felt something like a tendon had gone and when I put my weight on my left foot it kept giving way and my leg was buckling. I had to quickly go and get some physio and she said, ‘don’t worry Debbie, it will feel like that but here are some icepacks’.

“I had to go back to the hotel, soak in a bath, then put an ice pack on for 20 minutes and no longer because then apparently it has the opposite effect.”

McGee still remains one of the favourites for the glitterball trophy along with singer Alexandra Burke and her partner Gorka Marquez, who topped the leaderboard for a second week in a row with their quickstep routine, which scored 39 points.