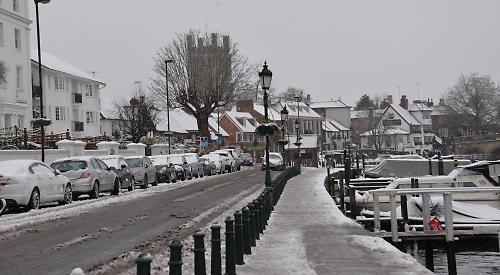 STAFF at a Henley charity camped overnight to look after three disabled children who had been left stranded by snow.

Carers Danii Russell-Woods and Sarah Russ, who work at the Chiltern Centre for disabled children off Greys Road, were among thousands of people affected by the snowfall on Sunday morning.

A number of festive events and sports fixtures were cancelled and some schools were closed for up to two days at the start of the week.

It was the worst snowfall since February 2013 and was up to several centimetres deep in some rural areas.

The children had to remain at the Chiltern Centre with the two carers during Sunday night after being stranded by the snow. Two were in wheelchairs while the other one has cerebral palsy.

They had been due to be collected in the afternoon but their families were unable to fetch them. One family spent five hours travelling from their home in Buckinghamshire before being forced to turn round and another was unable to make it from Bournemouth.

Miss Russell-Woods and Ms Russ were due to finish work on Sunday afternoon but stayed on.

Centre manager Keith Manning said: “I’m very, very proud of the team who continued working from Saturday to Monday morning. It meant everyone was able to get home safe and well.

“The users did not suffer any undue stress and they were very comfortable. It was nice and warm inside the building.

“It would have been a problem trying to get them home in case they were stranded. They would not have been able to get out and walk.

“First thing on Monday morning the families were able to get to the building and pick up their children at 10am.

“The two staff members in question were outstanding. If I could give them a medal I would. The families were so, so grateful.”

Conditions during late Sunday morning worsened as the snow continued to fall and police warned drivers to avoid going out unless it was absolutely necessary.

Some roads were impassable and cars got stuck on the A4155 between Shiplake and Playhatch and on Peppard Hill between Sonning Common and Peppard Common. Others drivers helped push cars out of the snow and the roads were properly cleared later in the day.

Several trees fell under the weight of the snow in Rotherfield Greys and Highmoor.

Among the events affected was Henley Town Council’s Sunday shopping festival, which was designed to drive footfall for retailers.

Very few shoppers ventured out and a lorry carrying four wooden log cabins for stallholders did not arrive after getting stuck on the M40. Traders had to set up in the town hall instead.

Some councillors and town council staff helped with gritting Market Place so some of the attractions could still go ahead.

Alex Bell, a member of the council’s park services team, cleared the car park outside the Leichlingen pavilion as there was a function at Henley Bowls Club.

The railway nativity due to take place at Sir William and Lady McAlpine’s Fawley Hill estate on Sunday was called off as the hilly roads in the area were treacherous.

The Santa sleigh run, which was due to visit Greys Road and Greys Hill in Henley on Sunday evening was called off.

Other events that were cancelled included a Christmas lunch in Bix, the South Oxfordshire Mencap Christmas party in Harpsden and a charity Christmas concert at Fawley Court.

The Henley Hawks’ women’s match against Cheltenham Tigers at Dry Leas was cancelled, as was the game between Emmer Green FC and Polonia Reading at Emmer Green Park.

On Sunday evening the Henley Living Advent Calendar performers had to be moved from Falaise Square to inside the town hall.

On Monday and Tuesday Gillotts School in Henley was closed as the site was deemed unsafe. A year nine science trip to Oxford was cancelled and the year 11 art mock exam was postponed.

On the first day, 266 schools across Oxfordshire were shut, including Chiltern Edge in Sonning Common, Langtree School in Woodcote, Icknield Community College in Watlington and Bishopswood Special School as well as the primaries in Checkendon, Nettlebed, Sonning Common, Benson, Ewelme, Stoke Row, Kidmore End and Lewknor. The latter two remained closed on Tuesday.

The Henley College was also closed on Monday.

South Oxfordshire District Council’s waste collections were also affected by the snow as some streets were too icy vehicles to use. Contractor Biffa hoped to have caught up with collections by tomorrow (Saturday).

Oxfordshire County Council said it sent out 25 gritters five times between 3am on Sunday and 3am on Monday to cover all A-roads and B-roads and some C-roads, a total of 6,000 miles of road.

Most of South Oxfordshire was covered by vehicles based at the council’s depot in Woodcote.

Temperatures dropped as low as minus 8.4C in Benson on Tuesday but the weather warmed up as the week went on. Forecasters say it will be cold again tonight (Friday) and tomorrow but will become warmer next week.