The man who really saved Flying Scotsman for nation 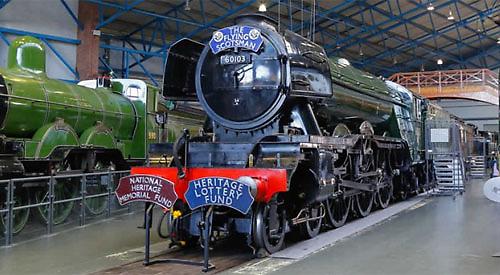 THE man who really saved Flying Scotsman for the nation has died, still very much an unsung hero.

The Hon Sir William McAlpine, who died on Sunday, rescued Flying Scotsman when her previous owner had run her for six years in America and, having gone bankrupt, had to abandon her.

Sir William said “obviously she couldn’t be left there” and the rest is well-documented history but you have to search for it.

While Sir William brought her back, gave her a much-needed total overhaul and ran her for 23 years, during which time he brokered an agreement with British Rail, which had banned steam from the main line, to be able to run steam-hauled excursion trains on their tracks, very few people know what he did, whereas many (including the National Railway Museum) seem to credit Alan Pegler with saving Flying Scotsman rather than running her into the ground and abandoning her.

Sir William went on to take her to Australia for their bicentenary (first ensuring that she had a return ticket), where she achieved an unbroken record for the longest steam-hauled journey in the world and met up with another engine he had owned and sold to an Australian club. Pendennis Castle is now back at Didcot Railway Centre.

Sir William single-handedly did more for the preservation of railways, trains and railway artefacts and buildings than any other.

As president of the Railway Heritage Trust and the Transport Trust, chairman of the Dart Valley and Romney Hythe & Dymchurch railways and director, trustee or such of many others, it is clear that railways were in his blood.

As the great grandson of Sir Robert (often known as “Concrete Bob”) who built, among other railway lines, the Glenfinnan Viaduct, it is perhaps easy to see why.

Of course, as a partner in the family building company, railways could only ever be a hobby and he adored the construction industry.

He started visiting sites with his father aged four and, while at 23 he was responsible for the construction of the world’s first commercial atomic power station (at Bradwell), his favourite job was the construction of massive oil platforms for the North Sea.

He ran SONE (Supporters of Nuclear Energy), lobbying for new atomic power stations before the lights went out while Britain, having led the world in this technology, still had the expertise.

For many years, he was on the board of the Zoological Society of London, which resulted in him giving over his estate to a sanctuary for animals that zoos and wildlife parks could not house: always regretting that he could not accommodate carnivores as the animals run free.

Conservation was in his blood. At his home he accumulated a vast array of pieces of buildings he felt should not have been torn down in the mayhem that was the Sixties, despite McAlpine, of course, benefiting hugely from the building frenzy.

The concrete flagpoles from Wembley’s twin towers are safe beside the Victorian station he rescued from destruction. The estate also houses a standard gauge steam railway and vast railway museum.

Sir William was High Sheriff of Buckinghamshire, nominated as chief of the Clan McAlpine, a school governor, director of many companies, patron of umpteen charities, host of the biggest and best parties, genuine friend to possibly thousands, from roadsweepers to royalty, advisor and mentor to many.

This was a man whose generosity of spirit and desire to help others shone through everything he did.

If a charity needed funds in a hurry, they could rely on him to help. If a youngster needed guidance or help to find work, he would guide or would call in his friends. A constant stream of people and businesses sought his advice and assistance. No one was ever turned away.