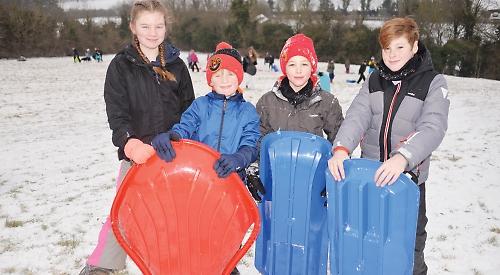 BUSINESSES in Henley were left counting the cost of Storm Emma after they were forced to close due to snow.

Up to 5cm of snow fell on Thursday and Friday as the UK was hit by sub-zero temperatures and blizzards that caused widespread travel disruption.

Rail services were badly affected and drivers were forced to allow more time for their journeys due to snow on the roads causing slippery conditions.

Several cars were abandoned on Peppard Hill in Peppard and one lane of Remenham Hill on the entrance to Henley was closed due to snowdrifts.

All primary and secondary schools in the area closed on Friday except Rupert House School in Bell Street, which had a skeleton staff, while many also sent pupils home early the day before.

Several shops in Henley closed early or all day on Friday, as did the NatWest bank in Market Place.

Sports fixtures in Henley and the surrounding villages due to take place over the weekend were called off, including Henley Hawks’ game on Saturday against Taunton Titans at Dry Leas.

The annual Goring 10km race, which was due to take place on Sunday, was cancelled after organisers said that parts of the route would not be safe for runners.

Kelly Massi, deputy manager of Mint Velvet in Market Place, said: “We shut at 4pm on Thursday because most of us aren’t local and we wanted to get home before we got snowed in. It was quite quiet anyway. Between 9.30am and 4pm we only had nine customers.

“None of us could get in on Friday so we stayed closed and
re-opened on Saturday, when we were heaving again.”

Elizabeth Hook, manager at Biggie Best in Duke Street, said:: “We closed at 3pm on Thursday and 4pm on Friday. It was just dead, there was no one out there and the staff also had to get home.”

Marie Elliott, assistant manager the Helen and Douglas House shop in Duke Street, said staff and volunteers had trouble making it in. She said: “It was easier to say we would close. We didn’t want the volunteers to come and find the manager couldn’t make it and they would be left standing on the doorstep.”

Reading Road milliner Liz Felix said she decided not to open on Thursday or Friday because the roads near her home in Reading had not been gritted.

She said: “I assumed Henley shopping would be very quiet with people not wanting to walk on slippery pavements.

“It’s a quiet time of year for me anyway so I wasn’t going to take the risk. I spent some outside time with my children instead.”

Rebecca Corfield, manager of Cara in Duke Street, said: “I live in the Wokingham area and the Wargrave Road was blocked on Friday and I just couldn’t get in.

“Another member of staff came in from Reading but only opened the shop for two hours and left because there was another blizzard.” Hare Hatch Sheeplands garden centre, near Wargrave, sold about 50 sleds from its farm shop over the week.

Marketing manager Andrea Burlingham said: “When the snow first fell one of our customers jokingly mentioned that people would be more interested in buying sleds than bulbs.

“We decided to take that suggestion seriously and stocked a range which flew off the shelves.”

In a statement, the organisers said: “Our concerns for the safety of all involved must take priority and as such, very regrettably, this year’s race has been cancelled.

“We will be sending an email to all runners in due course with respect to refunds.”

The Hawks have rearranged their cancelled match for either March 17 or March 18.

The club also cancelled its fixtures due to take place at Dry Leas, including Henley Bulls vs Shelford 2 and Henley Hawks Women vs Bath, as well as the mini and junior training session on Sunday.

In a statement, the club apologised for any inconvenience but said “player and spectator welfare is absolutely paramount”.

Reading Abbey Rugby Club’s match against Reading on Saturday was postponed and will now be played on March 17.

With children off school and some people deciding not to go to work on Friday, many families went out to play in the snow.

Children sledged down Drawback Hill in Harpsden with family and friends as well as other hills near Henley Golf Club.

Others took part in snowball fights in the street or built snowmen in parks including Mill Meadows and Makins recreation ground.