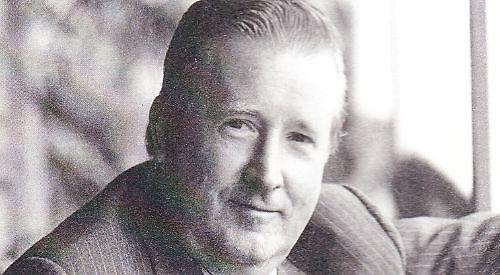 A NUMBER of well-known names attended the funeral of Sir William McAlpine at Fawley Church on Saturday.

The 350 invited guests couldn’t all fit into St Mary’s Church so many sat outside in a marquee and watched the service inside on TV screens.

They were offered a glass of sloe gin or whisky before the service and afterwards were encouraged to take one of the red and gold balloons to release when “Bill” was laid to rest in the grounds of his Fawley Hill Estate to the sound of The Last Post.

The steam railway enthusiast and collector was carried to his final resting place in a wicker coffin decked with a huge bouquet of red roses and a railwayman’s hat on board No 31, his old McAlpine works engine. Members of his family, including his widow Judy, children and grandchildren, either spoke or performed during the service, which Lady McAlpine revealed her husband had written himself two years ago.

It included Sir William’s favourite hymn, Battle Hymn of the Republic, and his “signature” poem, Hugging, that he would hand to people — accompanied by a hug, of course.

There was also a performance of To Love Somebody by Elvis impersonator Ben Portsmouth and of Ivor the Engine by his grandson Fergus McAlpine on the bassoon.

However, perhaps the most poignant moment came when his son Andrew recalled going into Henley on Tuesday last week during a power cut and finding just the temporary lights on the bridge on.

“It was as if the lights had gone out with him,” he said.

The funeral was followed by a party of the sort Sir William would have enjoyed, surrounded by so many close friends and acquaintances.

A larger celebration of his life will take place on Sunday, May 13 when everyone who knew him will be made welcome.

Farewell, Bill. We’ll all miss you.