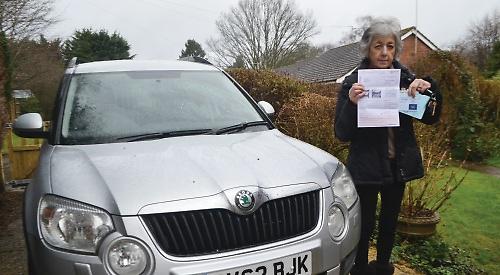 JO LANGLEY was fined after taking her husband to Townlands for an appointment.

Mrs Langley, 69, from Rotherfield Peppard, spent about half an hour at the hospital on February 20 while her 76-year-old husband Rodney, who has suffered a stroke, was seen.

She asked a member of staff to enter her car’s details using the keypad at reception so she could support her husband, who lives at a care home in Stokenchurch.

A few days later she received a £60 fine from Smart Parking in the post.

Mrs Langley said she couldn’t believe she had been penalised.

She appealed in writing to Smart Parking and included a letter from the hospital stating she had been parked legitimately.

The company said she would have to pay the fine or it would double.

Mrs Langley said: “In the end I paid it because I was worried it would go up to £120. They don’t realise how much anxiety they have caused me and my husband.

“I really do think they should scrap the scheme. It’s not right. It’s just a money making idea.

“What happens if somebody has a bad accident and they haven’t got the time to put their registration number in the keypad?

“I would like my money back because I shouldn’t have paid. It’s hard on elderly people and I feel so cross.”