House of many parts even got a ‘Domesday’ mention 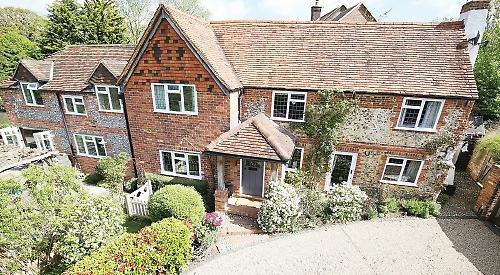 WHEN it comes to finding a pretty English village close to Henley, Crazies Hill is hard to beat. It is blessed with The Horns, a highly-rated gastropub, its own primary school, a village hall and a whimsical name thrown in.

I went to see Yew Tree Cottage at Crazies Hill on a hot weekday morning. The sun was shining and the birdsong was in full swing. There was no traffic so I could hear all the chirping and buzzing of the countryside wildlife as I wandered down the quiet lanes and marvelled at the sheer greenness of the place.

The cottage is next door to the beautiful grounds of Crazies Hall, formerly known as Summerfield House — a large country estate that was built in 1790 as Henley Town Hall, and painstakingly moved here brick by brick by Major WHM Willis in 1898 when the new town hall in Henley was built.

Yew Tree Cottage gives an excellent first impression. Set back from the road and hidden away behind tall wooden gates, it has a gravel drive and a well-stocked, mature garden with an expansive lawn surrounded by trees and dense hedges.

Its owners, Mark and Susie Wingate, are moving to take on a new house-build project. They have made significant improvements to the property over the years — including an extension, the floors, storage space, rewiring and all the interior decoration. They raised their family here and have fond memories of the place.

“It really is lovely here in the evenings,” Susie told me as we stood and admired the patio, where you can dine underneath a romantic pergola adorned with climbing grapevines and surrounded by summer flowers.

“We do entertain a lot — we planted the grapevines to give us some shade because it gets so hot. It’s a really nice, cool area,” she said.

The Wingates also planted the yew tree in the back garden because a house named after a tree naturally ought to have a tree of that name somewhere in its grounds.

Yew Tree Cottage is a large family home that has been built up in three stages. The oldest part is believed by local residents to have been included in the Domesday Book — a great survey of most of England and Wales commissioned by William the Conqueror and completed in 1086.

The middle brick section was built somewhat later than this, in the Sixties. The newest section on the left was added just 12 years ago, sympathetically using reclaimed brick and flint to match the old original part.

I started my tour of the cottage downstairs in the old section. The main living room has an inglenook fireplace with a log-burning stove, attached to an enormous external chimney on the side of the house. There are exposed beams and a wooden floor, and a small door that leads out to the driveway and lets in fresh air on a balmy day such as this.

From the living room we passed through the central stone-flagged entrance hall — which has a guest WC and stairs to the first floor — to reach a cosy family room that would make a fine playroom for young children.

Next to the family room is an impressive live-in fitted kitchen with a comfortable dining area at one end and wooden bi-fold doors leading outside to the patio. The kitchen has an island with a five-ring Smeg gas hob, two integrated Bosch ovens and a Bosch dishwasher.

Upstairs there are four lovely large bedrooms. The master bedroom has a vaulted ceiling, built-in wardrobes and an en suite shower room, and there is also a large family bathroom with a free-standing bath and separate shower cubicle.

What makes Yew Tree Cottage so interesting is the way that many of its historical features have been preserved and incorporated into its modern décor, making this a quirky and stylish place to live. It has an immense amount of character.

The rooms have been thoughtfully decorated with a blend of soft neutral tones and contemporary vibrant colours. Clearly, a lot of effort and creativity has gone into making each room uniquely homely and comfortable.

There is a fully lit and heated home office outside on the driveway, which would also make a fantastic teenager hangout space or games room. The property also benefits from gas-fired central heating, a pressurised water system and underfloor heating in the living room, kitchen, bathrooms and home office.