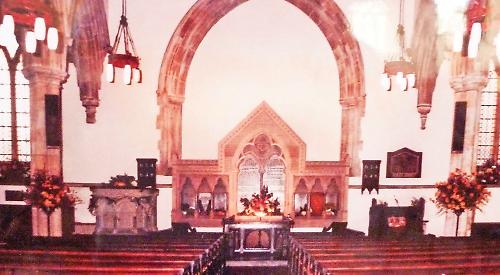 THE subject of the May talk was the history of Greyfriars Church in Reading.

The speaker was Malcolm Summers, who has been a member of the church since 1981 and published a history of it in 2013.

The Franciscan Order of Monks was founded by St Francis of Assisi in 1209.

The monks were commonly known as the “Greyfriars” because of their grey robes. They were required to live an austere life and go out into the streets to preach, especially to the poor.

The story of Greyfriars Church goes back more than 700 years to 1233 when Henry III granted land to the Franciscan Order of Monks to build themselves a monastic house.

The church was built on a remote site near the River Thames that was surrounded by marshland so floods would have been a constant problem.

In 1282 the Archbishop of Canterbury Richard Peckham learned of the monks’ plight, so he sent a request to Richard of Burgate, the abbot of Reading Abbey, to grant them additional land nearer the town.

Accordingly, in 1285 a new friary church was built at New Street (modern Friar Street) where it still stands today.

In 1538, following the closure of monastic houses ordered by Henry VIII, the monks were ejected from their church with little more than the clothes they wore. In 1540 the Crown sold the surrounding land to Richard Stanshawe and the building was rented to the town for use as its guildhall. In 1560 Elizabeth I gifted it to the town.

In the 17th century the building was converted to use as a poor house which could accommodate 14 of the town’s “deserving poor”.

During the siege of Reading in the Civil War of the 1640s it was used as a barracks by the Royalist and (later) Parliamentarian soldiers. By the close of the century the building had become the town’s prison and was known as The Bridewell.

The former nave was used as the exercise yard and the aisles were converted for use as cells. The inmates had only straw for beds.

By the 1840s a new prison had been built along Forbury Road and the Bridewell became derelict. The vicar of Holy Trinity Church, the Rev Richard Whitmarsh Phelps, had the idea of restoring the old building for use as a parish church.

He bought it from the corporation and through a public subscription raised more than £8,000 towards the cost of
re-building.

Work began on the restoration in 1862 under local architect William Woodman and on December 2, 1863 the Church of Greyfriars was re-consecrated by the Bishop of Oxford Samuel Wilberforce.

In 2000 the church was
re-ordered when the pews were removed and the east end
remodelled. The pulpit was
relocated to a less prominent position.

Today, Greyfriars is a lively Anglican church in the Diocese of Oxford.