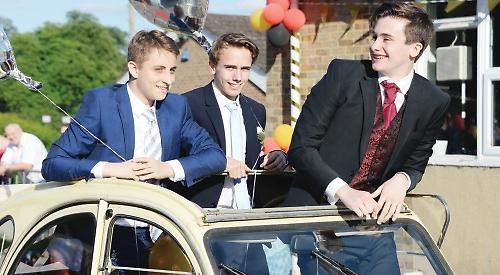 A COLOURFUL procession of decorated vehicles began the leavers’ prom at Gillotts School in Henley.

Pupils arrived at the secondary in Gillotts Lane on Friday evening in everything from classic and modern sports cars to camper vans and trucks and Jeeps from the Second World War.

One group arrived in a 40ft trailer towed by a 1965 Massey-Ferguson tractor which gave them a tour of the town beforehand.

The teenagers were cheered loudly when they arrived and disembarked from the trailer which was decorated with frilly pom-poms and a string of lights.

The tractor was driven by Andrew Evans, a builder and vintage enthusiast from Cookley Green, whose daughter Poppy, 16, is a pupil at the school.

Beforehand the youngsters had a party at pupil Samuel Butler’s home in Catslip.

Mr Evans said: “I use the trailer for tractor runs and other fund-raising events, mainly for the Thames Valley Air Ambulance. Poppy asked me for ideas about how she was going to arrive so we thought we could use it. It was a nice thing to do for everyone as Poppy and Samuel were at the same pre-school when they were three and ended up going through school together.”

Other vehicles included Citroën 2CVs, one decorated with flowers and bunting, a VW camper van from the Seventies, a Ford Mustang from the Sixties, an American Cadillac from the early Fifties and a 1946 Bentley.

Euan Turnell, Connor Reed and Charlie Douglas arrived dressed as gangsters in a Forties Ford Pilot being driven by Frank Jiggens and Dave Tyler. They sound the old-fashioned “klaxon” horn several times before climbing out.

One student arrived in a Lamborghini Superleggera sports car and another in a modified Subaru Impreza which revved its engine and popped its exhaust as it arrived.

There were also several Range Rovers and Land Rovers, a Mercedes convertible and a pink Fiat 500 whose headlights had been decorated with “eyelashes”. Tom McDonald and Caroline Wilkinson arrived in a 1942 Dodge WC51 truck used by the US Army in the Second World War. It was driven by family friend Richard Textor, from Stoke Row, who collects vintage military vehicles.

Martyn Sheldrake, who manages the Toad Hall garden centre in Henley, drove another group of pupils in his 1944 Willeys Jeep. After stepping out of their vehicles, the youngsters posed for photographs on a red carpet decorated with balloons.

Most of the girls wore party frocks or elaborate ballgowns while the boys opted for sharp suits and waistcoats.

The event, which was themed around a night at the Oscars, included formal photographs and a “photo booth” where students could pose with comedy props and signs.

There was also a disco with a buffet and an awards ceremony with the winners elected by their peers.

Finally, the boys and girls went back outside to enjoy a fireworks display.

Headteacher Catharine Darnton said: “It was such a lovely evening because the weather was perfect without being too hot and the students looked amazing.

“The girls chose some very pretty dresses and it’s always good to see the boys in suits. They had a great time and were very keen to dance while the fireworks provided a beautiful finish.

“We’re tremendously proud of them as they had literally just finished their GCSEs, which have become tougher with a greater emphasis on the examination. It was good that they could forget about it and let their hair down.

“It’s extraordinary to think that I can remember many of them from their ‘pioneer week’ visit to Gillotts in year 6 but now I’ll never call them ‘my year 11s’ again.

“Even the students remark how quickly the time seems to have passed but I love teaching that age group. It’s so rewarding to see them make that transition from nervous new pupils to adults.”