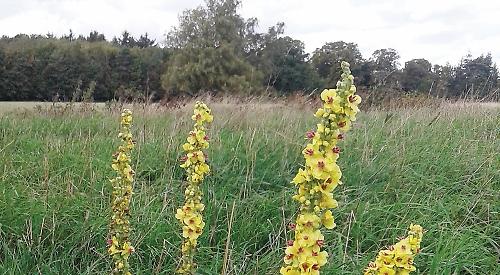 CROWSLEY Park, equidistant between Emmer Green and Henley, has always held some mystery for me and its elevated position affords some great views of the surrounding countryside.

The whole estate covers some 160 acres, mainly parkland but also a great deal of woodland, some of which is leased to the Forestry Commission by the owner, the BBC.

The mansion house in the southern portion was built in the 18th century but more of that later.

Last weekend my friend Dave Kenny and I decided to pay this enchanting place a visit.

We drive past Coppid Hall, the seat of the Lords Phillimore, and park up on the way to Blounts Court Road, which leads on to Sonning Common. A set of well-built steps leads to a right of way heading north up a slope.

I have read that there is a grotto somewhere in the grounds in this area but if it exists we couldn’t see it, only a stand of yew trees that are fenced off to the public as this is private land.

It is rumoured that a witches’ coven would assemble here to practise their dark arts but we hurriedly passed by as we were intent on viewing some of the majestic trees to be found here.

I have no idea when they were planted but the specimens of sweet chestnut (Castanea sativa) that we encountered here are truly ancient and magnificent.

Their bark is deeply fissured and they are fruiting as if there was no tomorrow. Some of the trees have developed into the strangest of shapes. Massive, old and awe-inspiring, they make me wonder if they will carry on forever.

According to Dave, the two adjacent groups of six chestnuts were named by a farmer who leased the land as “The 12 apostles”.

When some years back I made my last visit here there was a large head of cattle. The evidence suggested that they are not long departed but their absence has allowed greater inspection of the pasture.

There are plenty of wildflowers still in bloom, including common toadflax (Linaria vulgaris), dark mullein (Verbascum nigrum) and the delicate harebell (Campanula rotundifolia), all of which have their own charm.

Apart from the huge chestnuts, there are also some healthy old oaks from which I gathered some big valid acorns, which I intend to plant, and some splendid healthy ash trees to boot. One thing that is impossible to miss is the array of satellite dishes that are still operational and continue to feed BBC Monitoring, which has now relocated to London from Caversham Park, where I once worked during the summer holidays while still at university.

Many of the old trees here are parasitised by mistletoe (Viscum album). Some of these old veterans support a huge amount of this curious plant. In years gone by BBC Monitoring would present a large clump to the Brakspear brewery as a gift at Christmas time which could be seen hanging in the brewery’s main entrance.

The house is rather handsome when viewed from any angle. It was occupied in the mid-1800s by Sir Henry Baskerville, who was once high sheriff of Oxfordshire and a friend of Sir Arthur Conan Doyle.

The main gates to the house have “hell hounds” atop with spears through the throat, supposedly to lay a curse so one can deduce the inspiration for Sir Arthur’s tale.

It was a very blustery day and we had briefly to take cover alongside Gilsmithers Wood as the rain suddenly came down.

Otherwise we had a superb time and I wonder what I could learn from the old trees if they had eyes and ears and could speak to me.