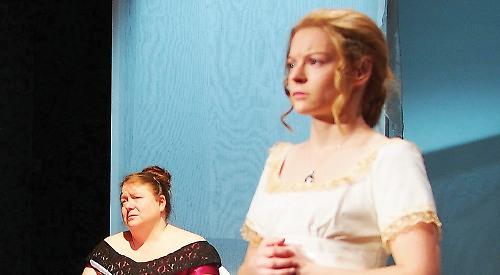 FRANKENSTEIN was written more than 200 years ago, yet Mary Shelley has remained the poster girl for Gothic fiction ever since.

The novel itself is remarkable, yet what’s more remarkable still is that Mary Shelley started writing it when still in her teens.

So it’s not surprising that Liz Lochhead took Mary Shelley’s life, including the writing of Frankenstein, as the topic for her 1982 play Blood and Ice.

Matthew Beswick’s production for Progress takes the innovative step of casting two actors as the author — Debora Rochfort as the young Mary Shelley and Ali Carroll as the older, widowed Mary.

The narrative follows a fluid timescale, framed around the reminiscences of the older Mary of a period spent on the continent with Percy Bysshe Shelley, Lord Byron and Claire Clairmont, when she dreamed up Frankenstein.

This is a language-rich drama and the cast delivers the dialogue with clarity and confidence.

Special mention goes to Debora Rochfort for her steely composure as the young Mary, pitting her serious take on life against the silliness of her stepsister Claire (Caroline White).

Full marks also to Francesca Alfano for her dignified and believable portrayal of the put-upon maid, Elise — she is treated badly and we feel for her, because we can see from her face how much it hurts.

Another hurt and tormented character is the older Mary — Ali Carroll ably conveys the sadness and disappointment arising from the loss of several children and her young husband.

Imaginative set design by Anthony Travis and Matthew Beswick, plus superb lighting from Lawrence Bird, transport us to a light and airy, early 19th century interior — but also show us how sunlit days can be riven by the fierce storms associated with the Gothic genre.

The drama raises some questions, not least about class as we watch Lord Byron (Max Carter) demean and patronise the maid Elise.

Another talking point is the question of how much people should defy social convention. Shelley (Nico Dombay) and friends are characterised in literary history as “Romantic” but Blood and Ice portrays their unconventional behaviour as questionable and, at worst, spiteful.

Within a drama about the creativity of childbirth and writing, the most existential question — that of the responsibility arising from creation — comes via the staccato voice of Juliette England as the “Creature”.

This is arguably the most challenging role of all. England stalks the stage, haunting Mary with unsettling persistence, while angrily questioning the reason for her “birth”.

All in all, Blood and Ice offers a valuable insight into the genesis of what has become a classic tale.