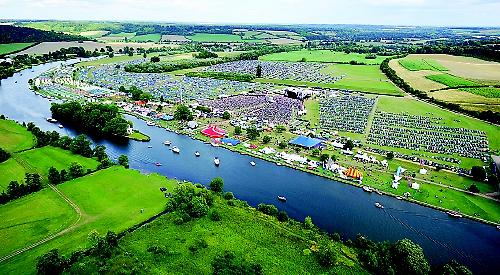 A MUSIC festival held near Henley every year is set to expand.

The organisers of Rewind, which is held on Temple Island Meadows over a weekend in August, want to gradually increase the audience capacity from 20,000 to 30,000 a day by the year 2022.

Broadwick Live also wants to begin the festival early on the Friday afternoon this year rather than in the evening, as has happened in previous years.

The company says it wants to cause “as little negative impact to neighbours as possible”.

But residents of the neighbouring village of Remenham are concerned about the extra traffic and disruption only weeks after that caused by Henley Royal Regatta and the Henley Festival, which both last five days.

They also fear that Rewind could become a fully three-day event with entertainment for guests arriving on the Friday to camp.

The festival, which celebrates Eighties music and features performances by pop stars from the era, began in 2009 and has usually sold out. This year’s event will take place from Friday to Sunday, August 16 to 18 and the line-up is due to be announced next week.

The increase in capacity will start this year if Broadwick’s licensing application is approved by Wokingham Borough Council.

The licence would also allow it to stage live and recorded music, dance, plays and films from 11am to midnight on the Friday and to sell alcohol from noon to midnight.

It would also enable it to include a Bank Holiday Monday but organisers say this is a “standard inclusion” and “at present there are no plans to utilise this”.

Remenham Parish Council will object to the application.

Chairman John Halsall said: “This is major increase in what they wish to do. I don’t think the increase in numbers would be tenable.

“In order for the event to take place at all, the residents have really got to sacrifice their lives completely for that weekend.

“Residents appreciate that they live in a lovely bit of the country and appreciate other people want to enjoy it and they welcome people to do so but if it just becomes a sea of events residents will find their lives are intolerable.

“The issues for Remenham are not from any individual event. It is an accumulation of the events that take place from May to September.

“Remenham used to have Henley Royal Regatta, which started on a Wednesday and ended on a Saturday.

“The regatta used to be set up on the Monday before and pretty much disappear by the Monday afterwards.

“Now there’s the Henley Festival and the Henley Masters and Henley Women’s Regattas.

“These events actually take over the village — our lives are materially affected. We can’t go into our homes and people leave their homes for three days.”

“Effectively what it means is that the good people of Remenham have hardly a weekend in the summer which is free from some sort of event or other.”

Cllr Halsall added: “Rewind does absolutely nothing for the village and does very little for Henley. All the eating and drinking, the money, is taken on site. It really does nothing for the local economy.”

Remenham Farm Residents’ Association is also opposed to the application on the grounds of “public nuisance”. Spokesman Mike Dudley claimed the area would be brought to a standstill by the traffic.

“It would cause tremendous inconvenience to anybody who lives round here and anybody who uses those lanes.

In a letter delivered to neighbours and friends in November, the organisers said: “The Rewind South current licence was issued in June 2010 and we feel it’s time to make it more robust in terms of our commitment to upholding the licensing objectives.

“We would also like to amend aspects of the operating schedule and maximum capacity, so as to allow us to develop the show gradually over the coming years.

“With the increase in capacity and licensable activity hours will come increased investment in security, traffic management, cleansing, noise management and consultation with our neighbours.

“We will continue to work closely with Wokingham Borough Council and other members of the safety advisory group to ensure that we are putting policies and working practices in place that create a safe site for our staff and customers and that takes very much into account the needs of householders nearby.

“We would like to take this opportunity to make it clear that we do not intend to submit an application for a second premises licence on the site.

“This decision was largely based on the feedback we received from nearby residents.

“The focus for us now is to develop Rewind South gradually and in a way that causes as little negative impact to neighbours as possible.”

Rewind was started by David Heartfield, from Rotherfield Greys, who was chief executive of Impresario.

In 2017 it was sold by Impresario as part of a £30million deal to radio group Global, which owns Broadwick Live.