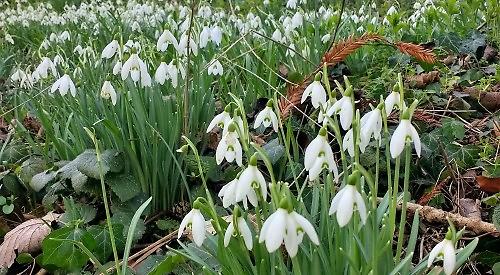 THIS morning I’m greeted outside by mist and frost but I think, “not to worry, it is February after all”.

The weather forecast is pretty good and it turns out to be correct.

After feeding the wild birds — sometimes a robin waits on my doorstep — I head off to join my friends Dave Kenny and Alan Pennington.

Soon we are heading towards Goring Heath in search of early blooms.

We emerge from the car at the side of Gutteridge’s Wood to a brilliant bright blue sky.

By the roadside is a fine display of crocuses. They are delightfully colourful, a purply pink with golden anthers. They resemble the wild spring crocus (Crocus vernus) but are more likely to be cultivated garden escapees.

We proceed through a kissing gate and head across Collinsend Common with its old walnut and cherry trees.

Two horses approach me hoping for a treat as I have previously fed them carrots but today I’ve forgotten to bring some and feel very guilty. I’ll have to bring a double portion next time. The local moles have been very industrious as their little hills are everywhere.

After making our way along the footpath that crosses the common, we join a small lane via another gate near the corner of Coxsetter’s Wood.

As we pass Rose Cottage, a dog is sunning itself but scuttles off as we approach.

On the right-hand side is a newly planted native mixed hedge which is doing very well (Dave had a hand in this).

Beyond it some saplings have been planted to replace their ancient relatives so it doesn’t look like a retirement home for trees anymore.

After turning left at the crossroads, we reach Holly Copse with its ancient buildings. What a wonderful corner of the world this is.

A huge bank of snowdrops is in full flower beneath catkin-heavy hazels — a sight to behold. They look like the backdrop to a Pre-Raphaelite painting, the leaves a delicate greyish-green, the flowers dazzlingly white. An isolated patch of these spring flowers is often an indication of a long-lost dwelling.

Leaving Holly Copse, we head into the wood to the east. This wood is open and mainly populated by beech trees, which have been thinned out over the last few years, but there are also ash, oak, field maple, cherry and yew trees as well as the wild service.

The ground is covered in sweet woodruff (Galium odoratum), which has quaint little four-petalled flowers that will appear in May and have the scent of new-mown grass.

The leaves of lords-and-ladies (Arum maculatum), herb-robert (Geranium robertianum), enchanter’s-nightshade (Circaea lutetiana) and dog’s mercury (Merculiaris perennis) are also making their presence known amongst the leaf litter. Sweet, common dog and early dog-violets (Viola odorata, riviniana and reichenbachiana) will reveal themselves over the coming weeks. We search in vain for our first primroses. Hopefully they will be showing before too long along with grateful bees.

It is very peaceful here apart from the ever-present cawing of crows above the bare canopy.

We stop to admire one of the largest badger setts that I’ve ever encountered on a slope below a yew tree. I wonder how old it is as I have been visiting these woods for around 40 years. The badger’s “runs” have not changed in that time. I decide to pay a night visit in the summer in the hope of seeing the occupants.

Moving on, we find ourselves with fine views towards Mapledurham with its terrific old house.

As we drop down to the valley bottom I’m dismayed to see that two magnificent and colossal beech trees are no more, just mere stumps. At least these will eventually become host to an extensive micro-environment that will support many organisms.

A graceful old wych elm has gone too. What a shame.

Before making our way home we check on two mezereon bushes (Daphne mezereum (from the Arabic “rose eye” mazaryun) in the hope of finding them in flower. They are not out right now.

Dave suggests that they may have suffered from a frost but maybe we are just too early. We will return to find out.

It has been a remarkable month, warm and mostly bright, but I’m not holding my breath with March still to come. I am, however, looking forward to returning here to enjoy nature in all its glorious mystery.