Cult musical rocks the house in fishnets and feather boas 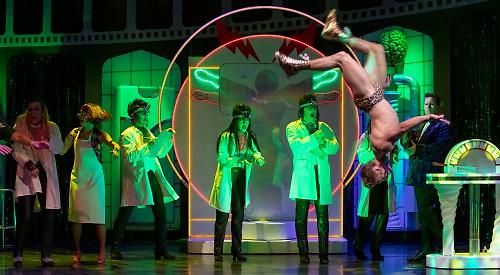 SINCE the first production in 1973, Richard O’Brien’s Rocky Horror Show has become a theatre legend and it has a devoted cult following.

To enjoy the full-on kitsch “Rocky Horror” experience, superfans come along decked out in fishnets and feather boas.

I didn’t dress this stylishly, but many did — and the effect was fabulous! From the first, the packed auditorium gave a rapturous reception to Christopher Luscombe’s accomplished cast.

It turns out the place is inhabited by a motley crew of risqué characters and it looks likely these all-American kids will have their eyes opened to a different world.

Enter Duncan James on stupendous form as the outrageous Frank-N-Furter, keen to introduce his newly-made eye candy, Rocky, played by Callum Evans, who is wonderful as the strongman gymnast, turning casual cartwheels across the stage and generally being hunky.

Audience participation added an extra dimension to the production and Philip Franks, brilliant as the suave narrator, managed the banter expertly, sparring with the audience with witty aplomb.

In such a spectacular show, stagecraft is all-important and in this production you’ll find first-class lighting, costume, set design and choreography from the creative team.

There’s live music to accompany the suite of belting songs, effortlessly carried by strong voices from the cast.

The audience cheerfully singing along added extra zest and volume to the party atmosphere.

This genre-bending and gender-bending adult pantomime is a must-see, with loads of laughs.

If you want to do the time warp and step into a crazier world, bag some tickets for this fabulous extravaganza.

Dammit Janet — and everyone else — I defy you not to have fun!