Thames-inspired artist is going with the flow 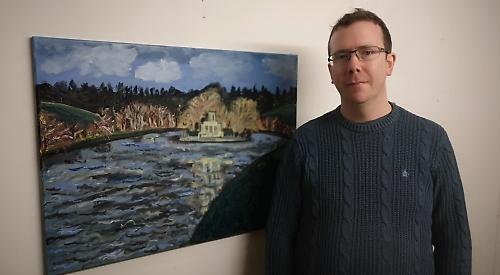 AN artist who takes inspiration from the River Thames is staging an exhibition at Henley’s Old Fire Station Gallery.

Will Mackenzie grew up in nearby Medmenham but “Upstream and Downstream” — which runs until Tuesday (April 23) at the Upper Market Place venue — is his first exhibition in the town.

Now 39, on leaving Sir William Borlase’s Grammar School in Marlow he studied at the University of Manchester Institute of Science and Technology before qualifying as a solicitor.

“I read biochemistry for reasons I can’t really explain any more,” he says. “And then I went off and became a lawyer afterwards.”

Will, who is married to Daphne, a weightlifting coach, works full-time for the Government Legal Service but manages to fit his passion for art in around everything else.

“I still have a normal day job, if you like, but I’m increasingly producing art and putting on exhibitons and trying to sell it.

“Upstream and Downstream will be my third exhibition this year, having been in a couple of group shows already.”

Will is now in his fifth year as an artist, having developed a passion for painting in his mid-30s.

“I started painting in 2014 and the first exhibition I did was the summer of the following year. I did two that year, if I remember rightly.

“There’s an organisation called the Law Society Art Group, which is a group of artists associated with the legal profession, and they have an annual show every year.

“The first painting I entered for that was in 2015 and then I put on my first solo show at a gallery in Stoke Newington, which was just a one-day show, and that was quite successful.

“I’ve been in a number of group shows since then and put on a number of solo shows at art cafes and similar venues.”

Because Will now lives and works in London, he admits it has taken him a while to think about putting on a show closer to where he grew up, and says the suggestion to use the Old Fire Station Gallery came from one of his childhood friends from Medmenham.

“He came to one of my shows in London and told me about the Old Fire Station Gallery and said, ‘Why don’t you do a show there?’ That was a couple of years ago now. And then, yeah, we booked it last year and off we go.”

Was Will a self-starter when it came to art, or did he have lessons?

“Well, I kind of started experimenting myself, but I went along to the group classes run by an organisation called the Independent Art School. They were once a week and the tutor there was a guy called Hugh Mendes.

“Then after about a year, they shut down. But then Hugh contacted me and asked if I was interested in having one-on-one tuition. I said yes, and that’s kind of developed — so now I sublet his studio from him.

“He paints in there four days a week and I paint in there one or two days a week, and then we sort of meet up once a week and discuss what I’ve been doing. I still get tuition from him but also a studio space, so that works quite well.”

Upstream and Downstream is Will’s fourth solo exhibition and features a number of familiar Henley scenes, including Henley Brewery and Temple Island.

“There’s going to be a few others of Henley too. There’s one of Marsh Lock, looking down the wooden bridge towards it. And then there’s a view from the Henley bank of Rod Eyot island. There’s a night-time scene of Henley town hall and there’s a view coming from Marsh Lock looking towards Henley, so you can see the bridge and St Mary’s Church and some of the town.

“The big thing with oils is that they take ages to dry, so depending on whether it dries in time there might also be one from the little slipway by the brewery at the end of New Street where all the ducks and swans gather, looking across the river to the Leander Club and Henley Bridge.”

Harking back to Will’s university days, which he funded partly by working at the Henley Royal Regatta each summer, a painting of Canal Street in Manchester is among those going on show.

“I was up there recently visiting friends and I like waterways and particularly industrial canals, so it was an obvious choice, really.

“We’re hoping there’ll be about 35 pictures at the gallery. We’ve got about 35 to hang — whether we put them all up we’ll decide when we get there. We hang it on Thursday morning, so the exhibition will open some time on Thursday afternoon.”

Does Will take inspiration where he finds it or does he ever visit places specifically to paint them?

“I sometimes go on trips to paint. We went on holiday to Cornwall a few years ago and the idea was to find some nice places to paint, but usually I’m just sort of wandering around and I see something that’s interesting and I either sketch it or photograph it or both and then work it up into a picture later.”

Would he like to be able to go full-time one day?

“That would be nice, but it’s a very competitive world and not easy to break into to the extent where you can make a living of it. But that is an ambition.”

Will can also be found on Twitter at www.twitter.com/willjmackenzie