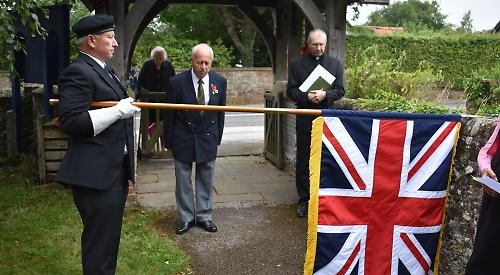 MORE than 60 people marked the 75th anniversary of VJ Day in Henley.

The Second World War was brought to an end with the surrender of Japan to the allied forces on August 15, 1945.

Fighting in the Asia-Pacific region had taken place from Hawaii to north-east India and the Commonwealth’s principal force, the Fourteemth Army, was one of the most diverse in history with the world’s major religions represented and more than 40 languages spoken,

Events to mark the occasion on Saturday had to be scaled back due to the social distancing measures brought in to help tackle the coronavirus pandemic.

A 20-minute ceremony held in Henley market place was hosted by the Henley and Peppard branch of the Royal British Legion.

The flag of the Royal British Legion was flying from the town hall.

Lt Col Peter Blaker, president of the branch, told the spectators that people tended to think of the end of the war as May 9, 1945 — VE Day — but it wasn’t.

He said: “What happened in the Far East was irrelevant to most people and yet on December 1941 we were engaged in a war that went on and was relentless, brutal and of strategic importance to us.

“There were families in the Henley area who lost fathers, brothers, husbands and sons. Then there were prisoners of war, not just captured soldiers and servicemen, but civilians — women and children — who suffered indescribable conditions in those camps.”

He then recited the exhortation before Rev Jeremy Tayler, the rector of Henley with Remenham, led prayers.

There was a two-minute silence at 11am preceded by The Last Post and followed by Reveille, both played by bugler Stuart Henderson, from Reading.

Mr Green led the crowd in giving three cheers for the Queen, who is the patron of the Royal British Legion, to conclude the ceremony.

Afterwards, Mr Green said: “I was heartened by the number of people who joined us. The town was well represented from the Mayor down to families with young children. It was a timely reminder that, even after VE Day, the war was not over.

“Most people believe it was the atom bombs which caused the final surrender of Japan.

“The actual Burma campaign was one of the most successful and one of the most hard fought by the British and Indian armies. It was the first major military defeat of Japan.

“In these times of recollection, we must not forget what went before so these things don’t happen again.

“We have to continue to raise funds to help those and their families who have suffered through conflict.”

Members of the branch enjoyed a special lunch with a wartime theme at the Maltsters Arms in Rotherfield Greys, which was once the headquarters of the Peppard and district branch of the Legion. In Nettlebed, about 30 people gathered at St Bartholomew’s Church lychgate, the village’s war memorial, at 4pm for a short ceremony.

Jim Bowers, who chairs the Nettlebed branch of the Legion, said that a battalion of the Oxfordshire and Buckinghamshire Light Infantry served in Burma as well as two battalions of the Royal Berkshire Regiment.

He added: “There were an awful lot of people who didn’t come back from the Far East.”

Prayers were led by the Rev Mark Ainsworth, priest-in-charge of Nettlebed, before the names of 11 servicemen from the village who died during the war were read out by Lady Anabel Elworthy.

Mr Bowers recited the exhortation before a recording of The Last Post was played and a two-minute silence was observed. David Challis, secretary and treasurer of the branch, lowered a Union flag standard before Reveille was played.

At the end of the ceremony hand bells were rung in the churchyard by Peter Ellis and his children Dominic and Jennifer and James Champion, all from Sonning Common.

The church’s six bells could not be sounded because of social distancing guidelines.

Ron Jewitt, president of the Caversham branch of the Legion, laid a wreath on behalf of members at the war memorial in Christchurch Meadows.

He said: “Remembered on this special day, the glorious Fourteenth Army, who fought in the Far East.” This was followed by a two-minute silence at 11am. In Shiplake, a short wreath-laying ceremony was held at the war memorial with Rev Stephen Cousins officiating.

Members of the Shiplake and Dunsden branch of the Legion were present and president Oliver Makower laid a wreath.

In Wargrave, there was a small wreath-laying ceremony at the war memorial on Mill Green led by Rev John Cook, vicar of St Mary’s Church.

After prayers and a bible reading, a two-minute silence was observed at 11am. Then the exhortation and Kohima Epitaph were read out.

Wreaths were laid by Tony Elliott, president of the Wargrave branch of the Legion, and 95-year-old John Fryer, who is the only surviving member of the branch to have served in the war.

Three poppy crosses were planted to remember the villagers who gave their lives in the Far East and are named on the memorial.

They are Leonard George Astell, whose grave is in the Kohima Cemetery in India, Beatrice Le Blanc Smith, who is listed on the Singapore war memorial, and Brig John Theobolds, who died near Kohima and is buried at Imphal Cemetery in India.

In Watlington, a short tribute event was held at the war memorial in High Street, organised by the parish council, where the exhortation was read

The Watlington branch of the Royal British Legion had asked people in the town to observe a two-minute silence at 11am.

Residents were also encouraged to hang out flags and bunting as they had done for VE Day in May.